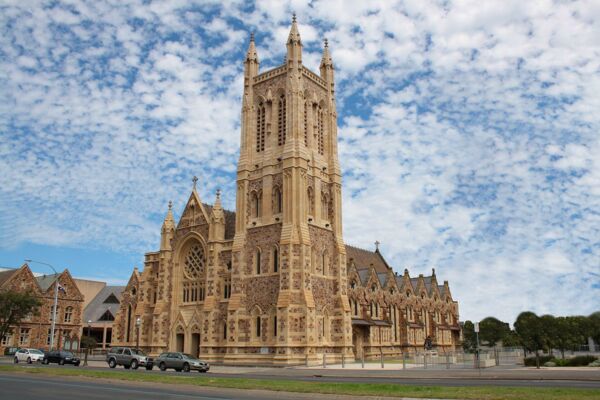 Built progressively, from the laying of the original foundation in 1851 to the completion of the bell-tower in 1996, this cathedral is considered a major Australian work of the Gothic Revival style. It is linked with a number of designers and builders, including the eminent English architects Charles Francis Hansom and Peter Paul Pugin.

When newly-ordained Catholic Bishop, Francis Murphy, arrived in Adelaide from Sydney in 1844 he realised the need for a cathedral church. He sailed to England in 1846 to further the cause of Catholicism in South Australia and, by his return in July 1847, he had successfully enlisted the support of a number of sponsors. Murphy's principal benefactor, William Leigh of Gloucestershire, donated a considerable parcel of Adelaide land, as well as funds for the erection of the church. Leigh also arranged for English architect Charles Hansom to design what he saw as a suitable church for South Australia's infant Catholic community.

Hansom's plans were seen as too ambitious for the impoverished congregation, so Bishop Murphy shelved them and considered other ways to erect a cathedral. In September 1850 he purchased the - acre site in Wakefield Street, and held a competition for a new cathedral design. Local architect, Richard Lambeth was awarded first prize. Although he was praised in the press, it seemed that his design was actually a derivative of Hansom's 1846 design. The foundations were laid in 1851 but further work did not proceed Lambeth, and probably many of his workers, left for the Victorian goldfields. It was March 1856 before building recommenced.

Meanwhile, Charles Hansom had been sent a copy of the plan and asked to re-create his original design on Lambeth's foundation. Hansom's design (of 1854) thus forms the core of the present cathedral. Construction, using Dry Creek stone, was supervised by George Strickland Kingston.

In 1986 Joe Emanuel, founder of Emanuel Constructions, gifted St Francis Xavier's with the stone to finally complete the Cathedral's belltower. Four thousand blocks of stone were cut by Italian craftsmen, who worked off the original drawings. The head craftsmen was a German. The drawings used by the stone cutters were made by an Italian Engineer/Architect who is still alive. Nicola Moffa today lives in Lockleys.

Eight peal bells were also donated to the church seven from Sydney's St Mary's Cathedral, dating from 1881,and one specially cast in London.

140 years after the Cathedral's foundation stone was laid, the cathedral was completed. It then became possible to dedicate the Cathedral. This was done on 11 July 1996. July 11 was chosen as this had been the date of the 1858 opening.

The 1869 Organ was built by Johann Wolff of, Adelaide. The 1926 Organ built by J E Dodd of Adelaide.