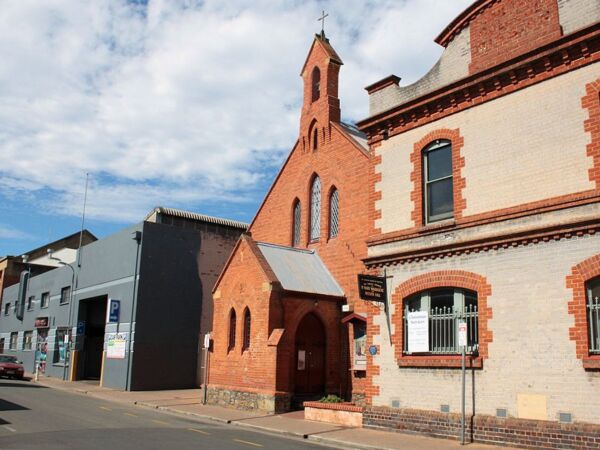 One of the oldest buildings in South Australia, the church was originally built in 1841 on the site on which St John's, Halifax Street now stands where it was commonly known as "St John's in the Wilderness" for its remoteness from the busier northern part of Adelaide. The church was poorly built, for it was condemned and its demolition ordered in 1885, though it was taken down with care in anticipation of reusing the materials for a Mission Church in Moore Street, where it was rebuilt to much the same design in 1886. The church bell bears the year 1838 and was presumably a feature of the first church.

Initially also dedicated to St John, the church was subsequently consecrated under the title of St Mary Magdalene in 1893. From the time of its foundation the church worked with the poor and marginalised people of the city and in 1912 the St Peter's College Mission was erected next to the Church.

The structure is formally described as a severely detailed Gothic building with a bellcote that is a significant feature. The architect was Mr R. Garlick Holwell, who designed many local churches, and the builders Couch & Perkins, overseen by a Mr. Harlow.

A small pipe organ thought to be the only instrument built by the local music teacher, organist and music seller John Hill Fray was installed in the church in 1897. It was removed in 1915 and was subsequently installed in several other churches. By coincidence, it is presently in St John's Church, Halifax Street, the church from which St Mary Magdalene's originated. A large two manual and pedal reed organ in an impressively carved case complete with faade pipes stood on the southern wall of the church for many years until a two manual Allen MDC Classic 42 organ was installed in 1989 following the closure of St Mark's, Maylands.