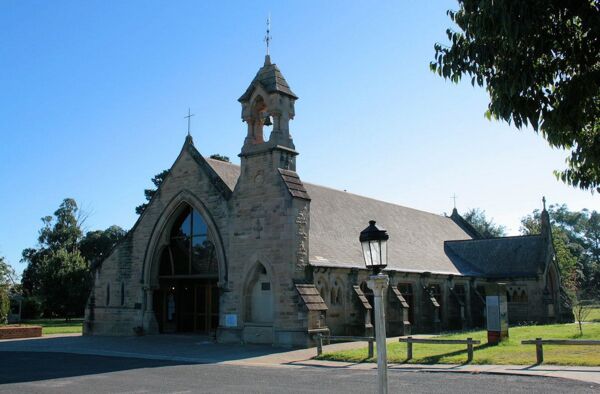 Originally built as the Necropolis Receiving House as part of the Gothic Mortuary Railway Station at Rookwood, Sydney. It was designed by James Barnet in 1869.

Built of stone the mortuary station fell into disrepair and by the 1950s the building's roof had been destroyed in a bushfire. The Anglican Rector of North Canberra successfully tendered £100 for the burnt out railway station and in June 1958 the foundation stone of All Saints Church in Ainslie was laid. The new Church, incorporating the stone elements of the former railway station, was designed by W Pierce and involved the transport and reassembling of 787 tons of stone. The builder, Stan Taunton, spent much time on site at Rookwood making section drawings of the railway station, supervising demolition of the building and numbering each stone block before transporting them to Canberra by semi-trailer. Pierce's design for the new Church included repositioning the bell tower from one side of the building to the other, glazing the open sides of the station, installing doors on the transepts and converting the stationmaster's rooms into vestries (Boden). The Church was dedicated on All Saints Day, 1 November 1959.

The Foundation stone was laid on 1 June 1958 by the High Commissioner for the United Kingdom Lord Carrington M.C.

The east window was recovered from Saint Clement's, Sheffield, when it was demolished in 1963 and the side chapel window, which depicts the Garden of Gethsemane, came from Bagendon, Gloucestershire.

The pipe organ, was built in London in 1857, and was purchased from a Baptist Church in Harrow in 1988.