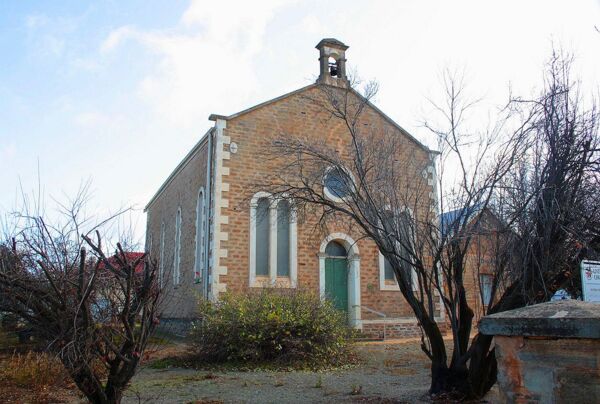 Opened in 1861 this former Bible Christian Chapel was built by Joseph Meller. The building is of Auburn bluestone and Watervale sandstone. William Threadgold was the carpenter. The first services were holed in a blacksmiths shop in 1850. The Church is of simply gabled hall with rather austere wall surfaces relieved by Romanesque derived semi-circular headed elements to principal facade and side elevations. Paired attenuated windows symmetrically disposed about main entrance with double doors and semi circular head.

Principal facade is topped by a small bell tower. Quoins and surroundings of shaped pick faced sandstone. Unbuttressed walling to principle facade. Roughly squared course Auburn slate has been used. The interior is of particularly interest because of finely detailed cedar fittings.

The bell is from the demolished St Patricks church at Undalya.