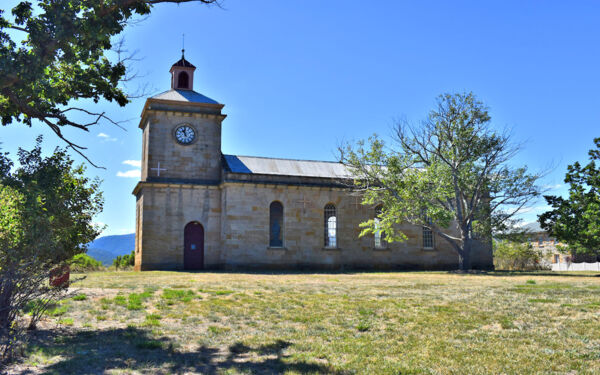 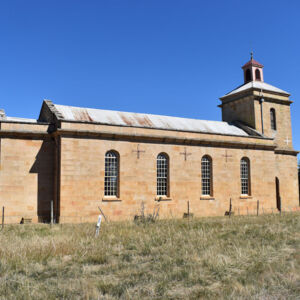 The booklet in part reads,

On November 1st 1838 a meeting (notified in the Hobart town Gazette) was called to consider the erection of a church at Avoca.The meetings chairman was Capt. A Gardiner S•P•M. Out of this meeting, a building committee was formed, and three men stood as guarantors for the cost: Simeon Lord the Younger and Captains William and Humphrey Grey. Building commenced in 1839. The plan is dated February 1839, and hangs in the rear of the Church. On March 10th 1840, Sir John and Lady Franklin visited and inspected the partly completed Church. By October of the same year, one hundred and twenty-two pounds ten shillings and nine pence had been collected and expended. The total cost of building was one thousand, eight hundred pounds, to which the Government contributed seven hundred pounds.

Also during the same year, the Public Works Department sent Mr James Blackburn to inspect and make a report on the building. On October 26th 1841, the Rev'd William Richardson, Colonial Chaplain was appointed incumbent at a salary of two hundred Pounds with fifty-four pounds ten shillings forage allowance and a allowance as the parsonage was not complete.

In 1924 Mr A. F. A. O'Connor had the church redecorated, and again for the centenary. In 1942, the church was extensively renovated. At this time repairs were made to the roof, the stone work pointed and the floor, which had been destroyed by rot, renewed, and a ventilation system placed beneath it. Plaster was replaced, the central passage relaid, the cedar work restored and the font and pulpit were set upon solid foundations.

In 1979 the church was again repainted, cracks were filled, a troublesome damp patch was repaired, and the tower was pinned.

The clock in the tower is a memorial to those men who went from the district to fight in the First World War.

1. A History of the Church of Saint Thomas the Apostle Avoca. Eric Cave 1980