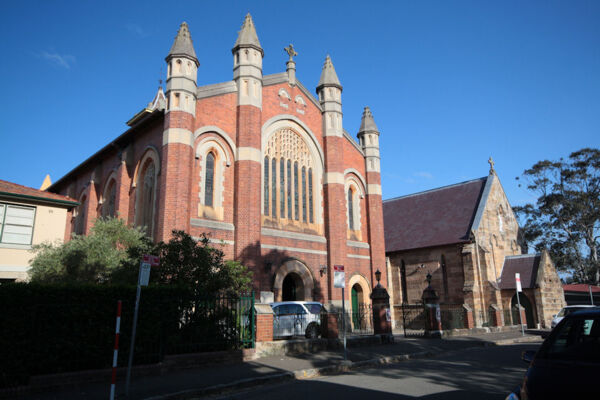 The first St Augustine's was built in 1848 and designed by Augustus Pugin England's most influential early Victorian architect.

In 1848 the Archbishop of Sydney put up a bond of 150 which would be voided unless part of a church or materials worth 400 were on site within 18 months. The "magnificent plot of land [was] beautifully situated on the summit of a hill, commanding a prospect of the surrounding country"

On 18 September 1848 the Vicar-General called tenders for the erection of the new church notifying builders that "the plans and specifications can be seen at Mr John Davis's, near St Patrick's church".12 Mention of formal tender documents implies an architect, but his identity is not known. The name of the builder was not mentioned either.

The first service was held on 13 April 1851 the day after the church was opened.

The Architect for the second church was Albert Bates and the foundation stone was laid on 7 October 1906. It was dedicated on 1 December 1907.