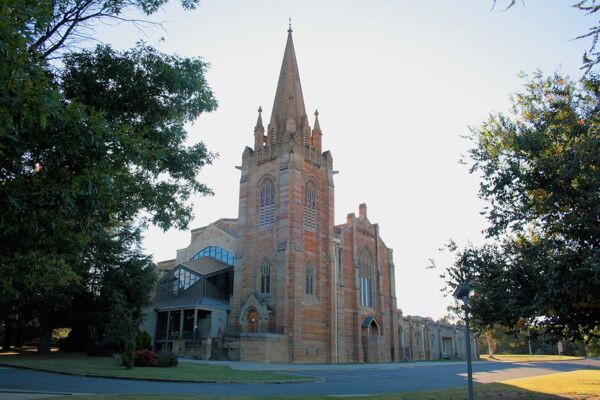 A sandstone Church in an adaptation of the Gothic Revival style. The side tower is square with a sandstone spire. The interior fills the usual sanctuary area and has fine joinery, particularly in the pulpit and screens. It contains many memorials of National importance. The Foundation stone was laid on 27 November 1929 by His Excellency the Governor General Lord Stonehaven D.S.O.

The Church was opened on 22 September 1934, on a site of approximately 5 acres.

A chime of bells was installed in the tower in 1968, and the Peace Nave completed in 1979. The Manse (residence) was opened in 1928, and stage 1 of the church hall in 1954. An extensive conservation and restoration program began in 1991.

The original St. Andrew's organ was built in 1933 by Hill, Norman & Beard (Aust) Pty. Ltd. and incorporated part of a demonstration "Christie" Unit Organ. The organ was installed in 1934 and its electro-pneumatic action was one of the first of its type in Australia.
In 1961 a new electric stop key console was installed. In 1964 it was decided to modernise and redesign the organ, both tonally and mechanically, and to divide it into two elevated organ chambers in the Choir transept. The contract for the work was awarded to the original builders, Hill, Norman & Beard (Aust) Pty. Ltd.