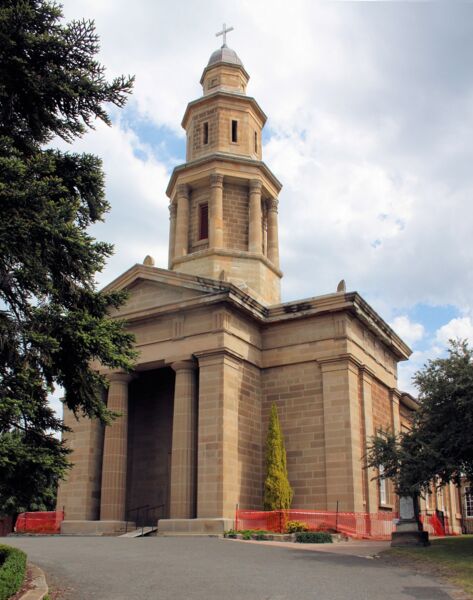 Located on the highest point of Battery Point, once known as Kermode's Hill the Church was designed by two of Hobart's earliest and best known architects. The land was in fact purchased from William Kermode for 250.00.

The tower holds a bell cast at the Swain's Foundry Hobart in 1853 and which weighs in at 405 kilograms.

The building was constructed of sandstone from the Domain quarries, brown rubble stone from Trinity Hill and stringybark from Port Arthur.

The original foundation Stone was laid on 19 October, 1837 by Lieutenant Governor George Arthur 11 days before his tour of duty ended. The foundation stone is not visible now owing to additions to the building. Consecration took place in 1838 by the first, and only, Bishop of Australia, the Rt. Rev. Dr. W. G. Broughton.

The consecration took place in 1838 by the first, and only, Bishop of Australia, the Rt. Rev. Dr. W. G. Broughton while the first Baptism took place on 10 June, 1838, only 15 days after the consecration. The child's name was Charles Graham.

The Tower and Porch was designed by the convict architect James Blackburn, and is very similar to St. Pancras' Church, London,

The Tower was built within ten years of the Nave, but the Porch was not added until 1888. The portion of the Tower where the bell hangs is a copy of the Temple of the Winds in Athens.

1. Church website.
2. St Georges Church a guide to the Church