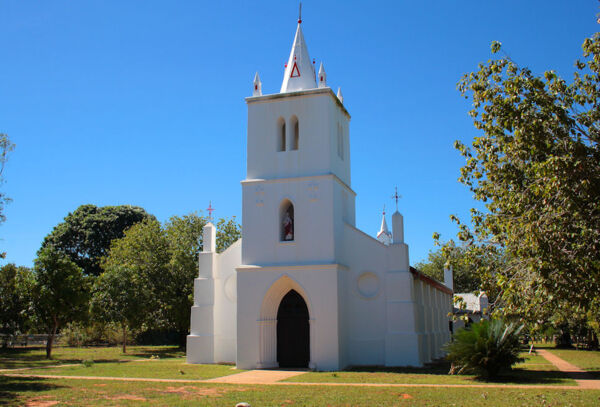 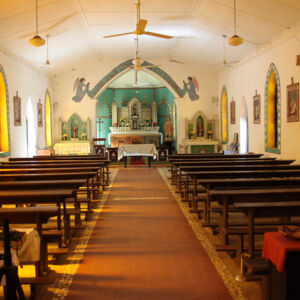 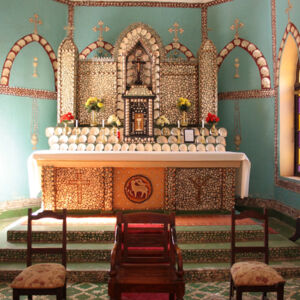 The community was established by Trappist Monks around 1890. In 1884, the first ever priest arrived to serve the Catholics in the Kimberley to try and convert the Aboriginal people. Bishop Matthew Gibney founded the Beagle Bay mission, developed in the land of the Nyul Nyul people.

The Pallottine fathers and brothers took charge of the mission in 1901. The St John of God sisters arrived in 1907 and taught in the school until the 1970s. Later, Sisters of St Joseph of the Apparition, Infant Jesus Sisters and The Our Lady of the Mission Sisters taught in Sacred Heart School.

The first church was a rough shed of iron, which blew away in a cyclone. A kiln was built to fire bricks from white clay and mud, using shell lime as mortar.

Plans for the replacement church were drawn up by Fr Thomas Bachmair (Pallottine Order) some time prior to 1908. Work finally began on the church in 1915 during a time when the German Pallottine priests and brothers were confined to Beagle Bay Mission due to war-time restrictions on their movements. The Church was finally erected in 1917.

The decorations of mother of pearl shells, cowries, volutes and olives was carried out by Father Droste with the help of Sisters and the Aboriginal community. While the mother of pearl has been used to decorate the main altar, the side altars are inlaid with opercula, a rare stone taken from shellfish.

The ceiling was plastered and decorated with shells to represent stars and the original roof was made from tree boughs and brush, until the termites ate it. Flattened kerosene tins were then used. Today it is corrugated iron.

Father Thomas Bachmair was the driving force behind the building of the Beagle Bay Church, but within two weeks of its conscreation he died of scepticaemia. His funeral was the first to be held in the new church.

The 12 metre bell tower was a later addition during the 1920s. There is the original bell from the Trappists, and two others that were a gift from a German parish. The Bell Tower collapsed in 2001 and later restored.

The Mission ceased to operate in the mid 1970s and the Beagle Bay community has been self determining since then, governed by an elected Community Council. However at that time, the community invited the Church to continue to provide priests and a school. Over the past decade there has been a transfer of leadership from religious orders to that of lay leadership.