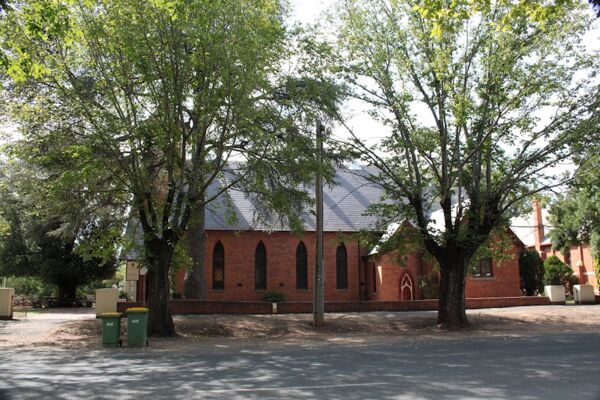 The earliest church services for Church of England (Anglicans) in Benalla was recorded in 1849 when Bishop Perry of Melbourne visited the settlement. The service was performed in the original court house. By 1854 an allotment of land at the corner of Bridge, Thomas and Martin Place had been set aside for a church, school and hall.*

The church was apparently built in 1860 going by the fact the first marriage was held on 5 April of that year. The church was dedicated by Bishop Perry on 16 May 1865.*

By 1876 the roof needed replacing and in 1882 the church bell was acquired. Gas was installed in 1889. Between 1900 and 1904 the church purchased the old Primitive Methodist church in East Benalla allowing it to set up a Chapel of Ease and Sunday School. A loan by Mrs Tapp assisted the purchase. A ventilation system was installed around 1905.*

The Church was altered in 1905 to designs of Walter Butler, again in 1907 to designs of Butler and Bradshaw, and most recently, in the 1970s, when the vestry and organ chamber were converted to become a side chapel and the side porch altered to become a vestry.*

The Church Hall is a plain shed-like building constructed of brick with a gable roof believed to be based on a design by Louis Williams, who was later responsible for the design of a number of Anglican Churches. The Rectory lies at the far end of the complex, and is a single-storey brick dwelling.