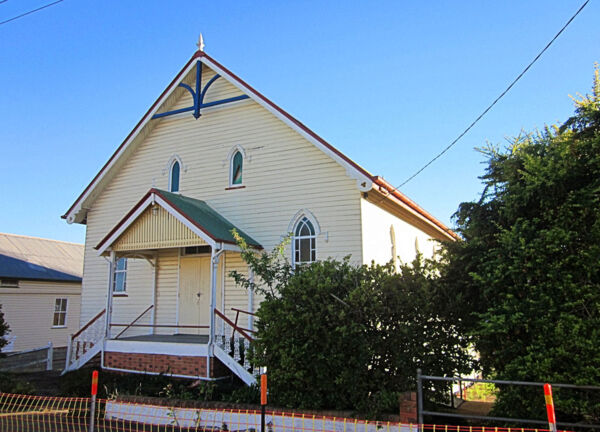 At Boonah the first service was held at the home of the late Mr. J. Betts and Mrs. Betts (afterwards Mrs. A, Vogel. sen, who now lives in John Street, Boonah), which was on the spot where the home of her son, Mr.J. Betts, stands. The congregation consisted of 24 persons, and the service was conducted by Rev. Powell. who had ridden from Ipswich for the purpose. Church goers attended the home for a few months for worship uintil services were started in the old State school building. As far as is known Mrs. Vogel's name is the oldest on the Boonah Church members roll. In the year 1888 the first church was built at Dugandan, on land given by the late Mr. Thomas Hardcastle not far from the bridge. This church was built by Messrs. George Beverley and T. Austin, and was opened by Rev. J. Buckle, head of the Methodist Church in Qieenaland at that time. In 1887 flood threatened to wash it away, so it was re-erected in 1889 on the site now occupied by the manse at the southern end of High Street.

The Church is now closed. After church Union it was Uniting Church until a new church was built in 1989. It was sold to the Salvation Army and they used it until they bought the old Church of Christ.

After formation of the Methodist Church in Australia a new and much larger church was built in Church Street in 1907.

The old church was moved to Kalbar in 1908. The Methodist Church is now closed. After church Union it was Uniting Church until a new church was built in 1989…plague attached.

The Methodist Church was sold to the Salvation Army. They used it  until they bought the old Church of Christ.