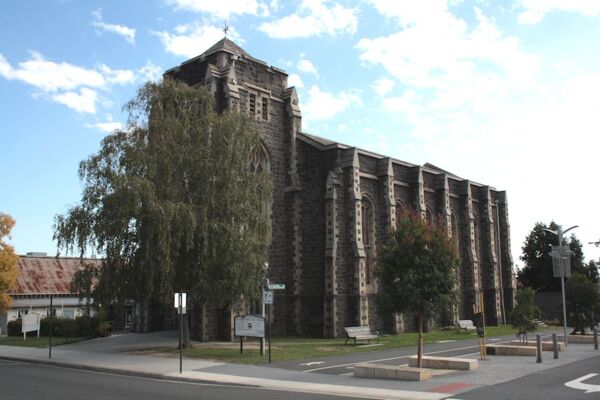 The first Presbyterian Church Service was held on 6 February 1867 by the Rev W Rolland. By 1887 a Theological student by the name of Alex Walker was engaged to run services at both Box Hill and Surrey Hills.

The original site for the first church was Court Street and a wooden building was opened in July 1889. A larger weatherboard church was built in 1911 at the corner of Whitehorse Road and Bruce Street.

A Gothic church in rough dressed bluestone, which is a remodelling of that designed by Smith & Watts and built in 1866-67 as the Presbyterian Church, West Melbourne, with a tower modelled upon St Botolph, Boston, Lincolnshire.

In 1935 the building, modified in its dimensions, and with the south front and tower redesigned, was re-erected at Box Hill. The architects in conjunction were John Scarborough, of Scarborough, Robertson & Love, and Hugh Craig, of Craig, Reynolds & Garrett, and the removal of the building was the most difficult task of the kind yet attempted in Australia. It has Perpendicular traceried windows filled with Ferguson & Urie glass, an open timbered roof and cedar furnishings. 6. Stained Glass: Ferguson & Urie 8. Joinery, Furniture & Fittings: open timbered roof and cedar furnishing; bell originally shown at the Centennial Exhibition of 1888-89.