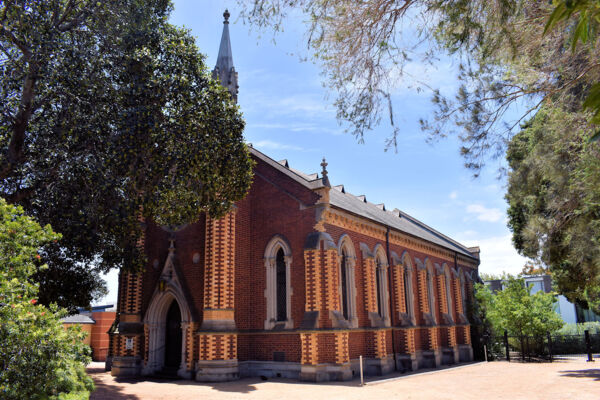 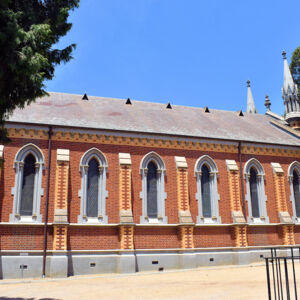 In 1853 a Church, the Independents (later Congregational Church) began services in a tent measuring 10ft x 12ft which they erected in Carpenter street. Their Minister was the Reverend Henry Kidgell recently arrived from England. In April that year it was resolved to erect a small wooden chapel on a quarter acre block of land in Male Street that was presented to the Church by Mr Nicolas Were, a good friend of all denominations.

The establishment of a Congregational Church in Brighton originated through the Congregational Churches of Collins Street and West Melbourne jointly organising a Sunday School and regular meetings for worship in Prahran in 1850. It was the first Pastor, the Rev. William Moss of Prahran.

The Hon. James Balfour laid the Church foundation stone on 15 June 1875 and the opening services were held on 2 December 1875. The architect was Mr Charles. Webb, builder Mr James Bonham and the erection cost was £2,836/17/-, exclusive of fittings. It was built in polychrome brickwork.

A memorial stone reads, "This memorial stone was laid on the 15th of June 1875". A plaque reads, " To the Glory of God The Presbytery of Nepean rededicated this church to the worship and service of God and named it Trinity Uniting Church 9th February 1992".

In 1881, the question arose as to whether Black Street should get a new organ. A committee started working on the project and after it had raised a lot of money, the deacons gave permission to go ahead, and George Fincham, colonial organ builder of excellent reputation, sent in a scheme for a new Organ. The original letters and layout of stops and materials for the organ are in the Archives.

The present organ was built in 1884 by George Fincham at a cost of £420. More information can be found here.