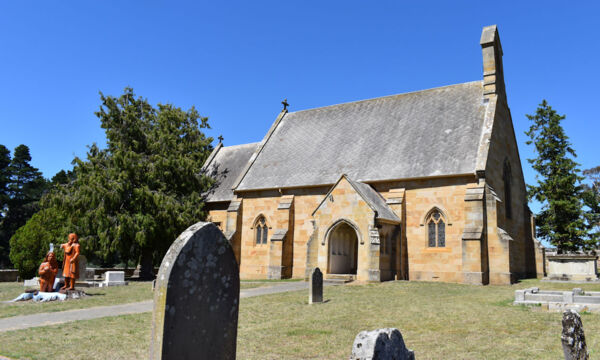 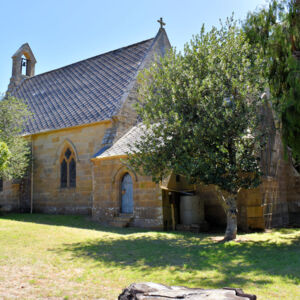 On 22nd March, 1846, Mr. Cox conducted the first Service in the Buckland Parish, and the only place in which it could be held was the local Police Station. as conducting his Services in a solid little stone Sunday School, and as if this were not enough, the foundation stone had been laid of a Church, which was in later years to be known far and wide for its beauty of design and solidity of construction.

Considerable controversy had arisen with reference to the age and origin of the very beautiful East Window of St. John's. The only authentic reference to the origin of the window is the report in the "Hobart Town Courier" of Wednesday, 15th January, 1850, which claims they are "the work of Mr. O'Connor, a London artist." The East Window is of such outstanding quality that several legendary stories are current with regard to its origin, the salient points of which are that it was buried for safety dur-ing the Cromwellian Rebellion, that it was connected with a Church built by William the Conqueror, and that it was sent out to Tasmania by the Marquis of Salisbury.

On the other gate post the inscription reads, " And in memory of Florence Nelson Gatehouse His eldest daughter who died at Brockley on 9th August 1957. Steadfast and true  and his wife Anne  1877 - 1985".