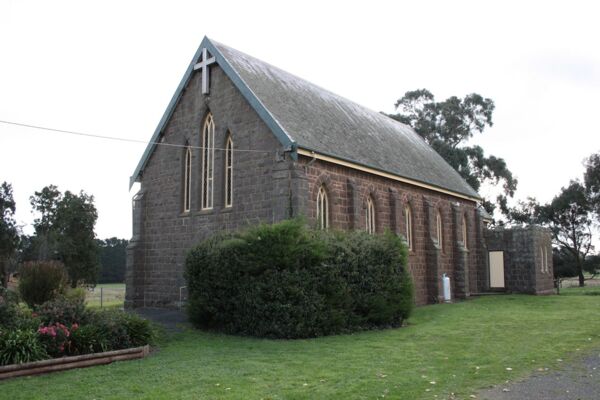 A meeting of locals was held in November of 1865 and the committee decided to purchase land where todays church is located. The first church service was held at Mr Benham's home on 6 January 1867.

In April, 1866 it was proposed that the church be of stone, 25 feet by 40 feet with a hardwood floor and shingle roof. The walls to be 18 feet high and 18 inches thick. The architect was Mr. Henry Richard Caselli who was responsible for many churches in the district. He was instructed to call separate tenders for the stone work, carpentering and joining, and painting and glazing. The lowest quote received for the painting and glazing was 77, the carpentering and joining 209 and the masonry work 508.

It was not until 25 April, 1869, that the church was dedicated for public worship on 25 April 1869 by the Archdeacon of Geelong who was the preacher at both services on that day.

In 1870 Messrs. Bacchus, Acton and Trigg offered to enclose three sides of the church land with a good fence of 3 rails, they finding and carting the materials for 6/- per load. The following year, arrangements were made with Mr. Schroeder to fence the front side of the land and gates and turnstiles made of wood were put in place. Later on this fence was coated with tar at the request of Mr. Linsdell.

In 1876 a six stall stable was erected for the accommodation of horses of people travelling a distance. This stable was a shed about 32 feet long and was erected b Mr. Schroeder for a cost of 24.10.0.

COMPLETION OF THE CHURCH BUILDING

By 1911 the Architect was asked to give fresh estimates of an additional bay to the church and a chancel. Mr. George Rowsell tendered 340 for the extension of the nave, 230 for the chancel and 118 for a vestry. It was decided to accept the tender for the nave and to defer the chancel so a debt not exceeding 500 be incurred.

The northern brick end was knocked out and several feet added to the main body of the church as well the beautiful chancel of which he was so proud. This meant closing the church for many months and the services were then held in the Sunday School.