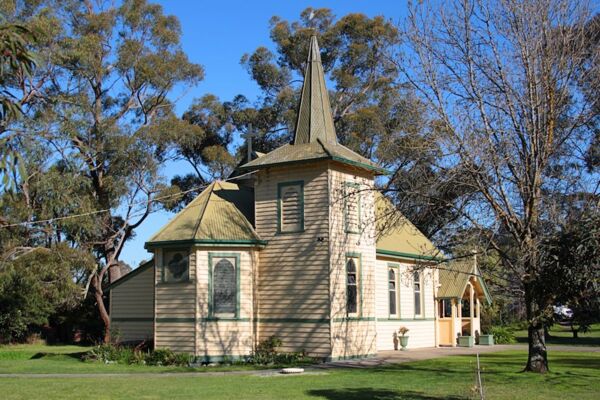 The Bunyip Parish of St. Thomas' was originally part of the Gippsland Fort mission in 1879 and early church services were held In Kraft's Hall. By the early 1890': a-proper church was being planned, and fund raising began In December 1891.

On 15 October 1902, Mrs W. A. A'Beckett Snr of Brighton laid the foundation block for the new church, which was designed by the architect Frederick Klingender, and bulk on land donated by the A'Beckett family. The font in memory of Mrs A'Beckett is to be found in the church.

St. Thomas' was opened by the Right Rev. Bishop Pain, the first Bishop of the Diocese on 28 December 1902. About 406 people attended the first morning and evening services and the Bishop had a busy day as there were also 14 baptisms registered.

The total cost of the building was over 377. The weatherboard church has been described as a gabled arts and crafts style church, with a corrugated iron clad roof and shingle pattern boards to a square tower set towards one end. The porch is gabled with an open picturesque gabled outer porch attached. It was reported to be one of the prettiest and most attractive buildings in the state.

On 11 December 1907 the Right Rev. the Lord Bishop of Gippsland conducted -a confirmation service for six candidates and, In September 1908 a new organ was installed.

Extensive alterations were made to the church in 1919 because of damage caused by white ants. In 1943 an entrance gate to the church grounds was erected by-the congregation as a tribute to Major Arthur and Beatrice A'Beckett who had given generously to the church over many years. , With the erection of a lychgate, the original gateway was relocated to the eastern boundary of the church grounds.

In 1945 the Bunyip Parish became reconstituted with the Rev. N. A. McLean as vicar.

A restoration appeal was launched on 21't December 100, to try to rectify structural problems relating to the roof, the need for re blocking the floor and for repainting.

Extensive renovations and extensions were carried out on the vicarage In 1995. In 1997 a new organ was purchased following a generous donation by a member of the congregation.

In 1996 a Lady Chapel, was established, dedicated to Our Lady of Walaingham. The most recent development is the erection of a lychgate, modelled on the original church porch.

Light and Life A History of the Anglican Church in Gippsland