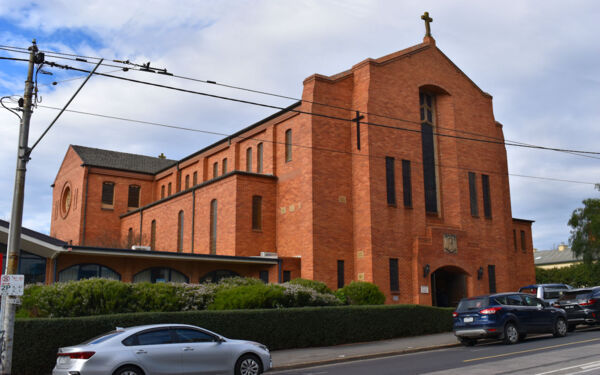 The first church opened on 8 February 1863, but Anglican worship in Camberwell began in 1856 in the home of Mr. James Price in what is now Burke Road. Mr. Price, who was later known in family memory as a lay reader at St John's, possibly conducted the first worship himself.

The following year, the first church, then known simply as the 'Church of England at Camberwell'' opened for worship. Services in the new church - a small brick building in the Gothic style - were still conducted from Hawthorn.

The foundation stone of the church was set in the north wall of the north transept, and may now be seen in the Porch below the tower and spire. It was officially laid by the Hon. Sir J. Clarke on December 19th, 1887. The inscription read as follows:— THIS MEMORIAL STONE WAS LAID By THE HON. SIR W. J. CLARICE, BART, ON DECEMBER, 191h, 1887 - Heath, Jackson & Gray Architects - Campbell & Wilson contractors- Rev. A. w. Creswell M.A. Incumbent

The attendance at the laying of the foundation stone was good and included the following clergy: The Ven. Archdeacon Stretch and the Revs. A. W. Cresswell, H. Taylor, T. H. Armstrong, J. Dawson and J. Fairbrother.

For a complete history of the church go to the Church website here.