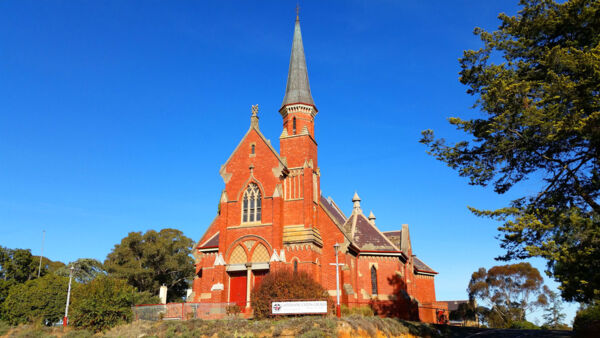 Formerly a Presbyterian church. The foundation stone was laid by the Premier of Victoria, Sir James Patterson on June 22nd 1894. The Church was officially opened on 16th December 1894.

The church was built by Mr Shillabeer to a design by the Ballarat architect Charles Figgis. It is a red brick building with cement dressings and a Welsh slate roof.

The church is architecturally significant as an example of a remarkably eclectic design by the architect Charles Figgis. It illustrates the eclectic architectural philosophies of the mid to late 1890s.

It draws on a range of influences: the tympanum over the central doorway with the decorative tilework is derived from French Romanesque sources, the tower is more French Gothic in influence, while the massing and roof form are more Italian Gothic in style.

The Presbyterian Church appointed the first minister to Castlemaine on 7th July 1852. He was the Rev James Low, a minister of the Established Church of Scotland.

The Crown made a grant of land to the Presbyterians in 1852 and it was not long before a tent church was set up , followed by a brick manse and finally a brick church in 1856. In 1858 a Free Presbyterian Church was formed in Castlemaine. However, after the union of the Victorian Presbyterian Church, the Free Church was sold off and the two congregations combined to worship at the original church.