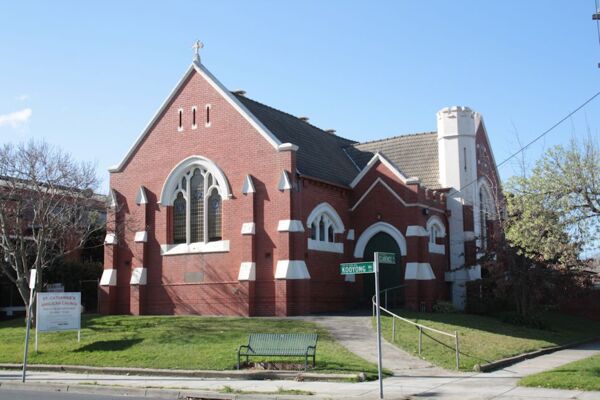 The Revd H.B. Macartney purchased a small weatherboard former Methodist Church, known as St Peter's Mission Church, Camden Town, in 1875, on the corner of Glen Huntly Road and Cedar Street. After this, Messrs. R.W. B. Mackenzie, and I..J. Davies and J.H. Davies officiating as lay readers from St Mary's, were among the first people to take the services. I.J. Davies later was minister of St John's Presbyterian Church, Elsternwick*.

On 19 September 1888 the last service was held in the old location. In October 1888 the church was moved by a parishioner, Mr Edward J. Waghorn, to the North-West Corner of Sycamore and Poplar Streets, Caulfield South, and the church was opened in the new location with the name of St Catherine's by Bishop Goe on 21 December 1988*.

The Revd J. Lacy Winn, curate of St Mary's was given special charge of St Catherine's in 1892, which became independent in 1907. It moved to its present location in 1915*.

The Foundation stone was laid on 20 September 1921 by his Excellency the Governor of Victoria The Earl of Stradbroke KCMC KB.

On 25 November 1923, an entry in the Preacher's Book changed the spelling from St Catherine's to St Catharine's*.