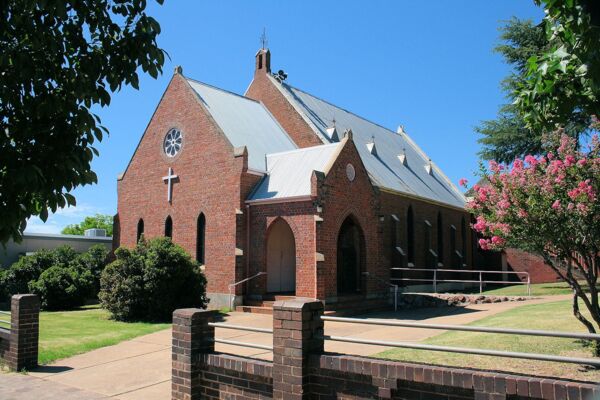 The town allotments were surveyed in 1854 and the first land sales were held later in that year. Property for churches was reserved - the site for the Wesleyan Church was on the south east corner of Kendal and Darling Streets, and the site for the Minister's Residence on the corner of Darling Street and Bartlett Lane. It was not until 1880 that the Interim Trustees from the Wesleyan Methodist Church in Sydney took up the grant for the Cowra land. They were Revs. Benjamin Chapman, Henry Honey Gaud and George Hurst who administered the land until trustees from the Cowra Church were appointed. The land was transferred to the new trustees on 14 October 1889.

The Foundation stone was laid on 9 November 1889 by Mrs Schofield. Tenders were called in the same year and construction commenced with Mr James Armstrong as the Architect , Mr HHS Francis as builder and Mr James Murphy as Supervisor of Works.

The new church was occupied for divine worship on Sunday, 29 June 1890 for the first time when the President of the N.S.W. Conference, the Rev. Dr. W. Kelynack, D.D., who had visited Cowra 15 years previously, preached three sermons suited to the occasion. The first sermon was concerned with 'The Influence of Christianity Upon the World'.