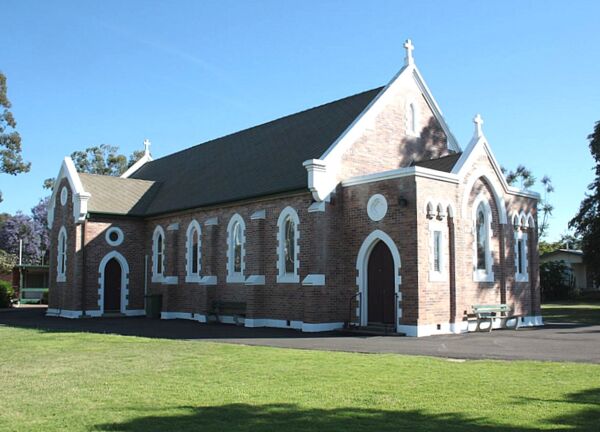 The Foundation stone was laid by the Right Honourable H.W.B. Forster of Lepe on 29 August 1922.

St John's Church, Dalby is a brick church constructed in 1922-1923 to the design of Harry Marks and is the third church of this name on the site. The previous timber church, built in 1876, remained on the site in a modified form as part of a former parish hall, until it was demolished in February 2003. The site of St John's Church is part of a continuing tradition of Anglican worship established during the first years of European settlement on the Darling Downs, which began in 1840.**

The Reverend John Gregor visited the area, holding services in camps and private homes from 1840 until his death in 1848. The energetic Reverend Benjamin Glennie succeeded him and his first service on the Downs was held in the parlour of the Bull's Head Inn at Drayton in 1848, there being no church. On 25 May 1851, Glennie held the first service in the Dalby area in the home of Hugh Ross. From then on, regular services were held in such diverse venues as private homes, a woolshed and the courthouse.**

The building is aligned on a northwest-southeast axis but this description treats this axis as the west-east liturgical axis, e.g. the northwest elevation is regarded as the west for liturgical purposes. St John's Church stands prominently to the corner of Cunningham and Drayton Streets, Dalby and is set within extensive grounds. An elegant composition in the Gothic revival idiom, the building is sheltered by a steeply pitched roof clad with fibrous cement shingles and the buttresses and external walls are of brown facebrick embellished with white cement copings and mouldings. Cruciform in plan, the transept accommodates a clergy vestry and a choir vestry and the west end a baptistery flanked by entrance porches. The nave is lit by lancet windows five of stained glass and one of coloured glass to the north and two of stained glass and two of coloured glass to the south. Both vestries are lit by lancet windows of coloured glass. Circular lights are over the external entrances to the vestries and oval lights decorate the internal doorways from these spaces the light over the south entrance now without its coloured glass. Internally, these windows are embellished with plain hood moulds**.