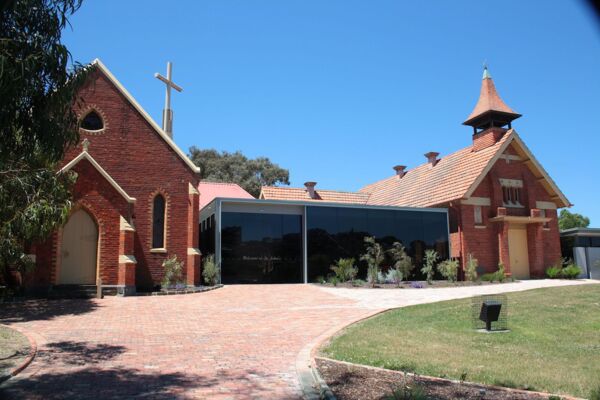 The first recorded Church of England services were conducted by the Rev. Francis Hales. In 1860 Diamond Creek came under the jurisdiction of the Eltham parish - with the Rev R Mackie, and then the Rev Josiah Hollis as vicars.

The building was designed by Charles Maplestone of Heidelberg, son-in-law to Anthony Beale of St Helena. Maplestone was a prominent architect who came out to Australia with his family in 1852. The foundation stone was laid by Mrs Isabella Maplestone on 11th November 1867.

The bricklayers for the church were G Stebbins, H Limmer, H Spicer and a Mr Timm while Thomas Day was the stonemason. Another three years were to pass before sufficient money could be raised for its completion. It was opened by Bishop Perry on 1st November, 1870.*

The church bell which hung under a tree for 50 years until it was incorporated in the parish hall was brought out from England and presented by Charles Orme.*

In 1916, the estate of George Martin Pizzey left sufficient money to build the red brick hall, which still stands today.*

In 2011 further alterations were made to the front of the Church.