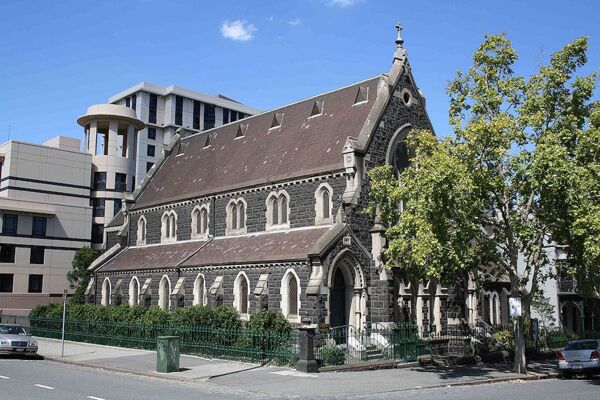 In 1852, a site was granted for a church at 22-36 Parliament Place, East Melbourne by Governor La Trobe.

The original 1853 structure was built by William Hellings to the specifications of architects Bellairs, Krsteiner & Co and was replaced in 1874 by a bluestone church, designed by Charles Blachmann, which houses an historic organ.

The Church is built in the Victorian period in the Neo-Gothic style, and today is classified by the National Trust (B2664). One of the most prominent parishioners was Baron Ferdinand von Mueller, the well-known botanist and director of the Melbourne's Botanic Gardens.

The bluestone hall was built as an extension to the original church in 1864 as a weekly and Sunday school. It was designed by Friedrich Kawerau and constructed by M Wolter and Wilhelm Finger who were members of the congregation.

The two storey brick and stucco manse which incorporates Gothic motifs onto a typical Italianate composition, was built in 1890 by H Kaiser jnr to the design of noted architect J A B Koch. It replaced the original 1855 manse which was constructed of corrugated iron. The manse was used as a pastor's residence until 1981 and is now used as offices for the German Lutheran Church.

Built by Robert Mackenzie was donated in 1874 by two members of the congregation and is still in use today.