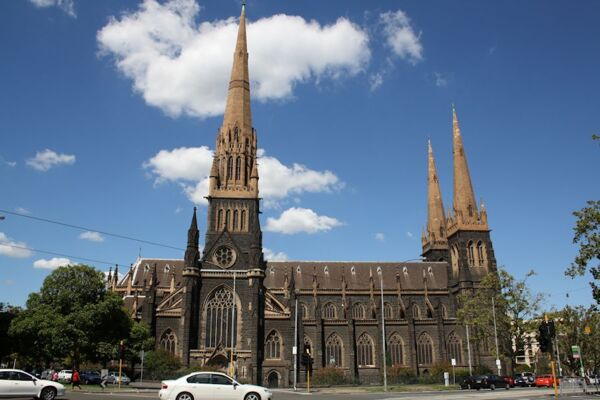 St Patrick's Cathedral is the cathedral church of the Roman Catholic Archdiocese of Melbourne in Victoria, Australia, and seat of its archbishop.

In 1847 the Colonial Secretary granted two acres of land for a church on Eastern Hill, where St Patrick's Cathedral now stands and by 1850 an additional two acres were granted.

In 1848, James Goold, an Augustinian friar, was appointed the first bishop of Melbourne, and became the fourth bishop in Australia, after Sydney, Hobart and Adelaide.

Negotiations with the colonial government for the grant of five acres of land for a church in the Eastern Hill area began in 1848. On 1 April 1851, only 16 years after the foundation of Melbourne, the Colonial Secretary of Victoria finally granted the site to the Roman Catholic Church.

Architect William Wardell was commissioned in 1858 to design the building. The gothic revival cathedral was consecrated in 1897 after a construction period of some 40 years. The Cathedral was designed in the Gothic style of early Fourteenth Century England, based on the great medieval cathedrals of England, a style at the height of its popularity in the mid 19th century. The foundation stone was laid in 1858.

The Church is built on a traditional east-west axis, with the altar at the eastern end. The project was delayed by severe labour shortages during the Gold Rush of 1851, which drew almost every able-bodied man in the colony to the goldfields, and the foundation stone was not laid until 1858.

In 1937 a contract for the central spire was signed and Conolly and Vanheems were granted the work. Completion took place in 1939 when they were blessed by Archbishop Mannix.

The cathedral's original pipe organ was built in the late 1870s by Robert Mackenzie and completed in 1880 by George Fincham. The current installation (1964) was built by George Fincham & Sons.
Bells:
These were purchased by Bishop Goold, Melbourne's Roman Catholic leader at that time, when he visited Europe in 1851-1852. He bought a peal of eight bells for approx 500. They arrived in Australia in 1853. The peal of eight is in F natural, with the tenor weighing approximately 700 kilograms. The peal set weights around 3556 kilograms or 3.556 metric tons.
The bells were hung in a low frame at ground level in the western aisle in 1868. The consecration service was attended by around 5,000 people. The eight bells bear the coat of arms of Bishop Goold. The bells were eventually hung at the south-eastern tower.