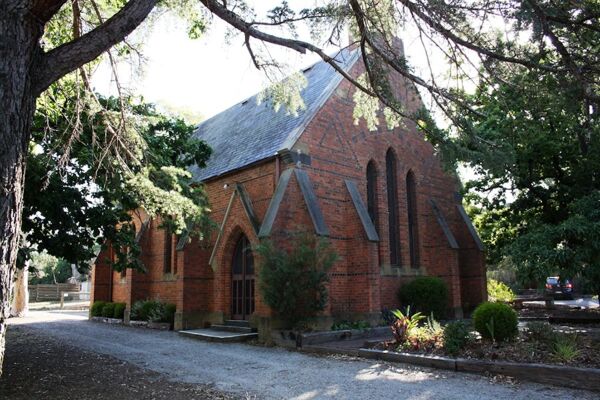 The land on which St Margaret's Church and Vicarage stands was donated by Henry Dendy, a well known Melbourne pioneer and wealthy land owner. Dendy later moved to England returning and residing in Eltham again. He chaired a meeting held in 1860 for the purpose of devising a means of establishing a Church of England in the township.

The foundation stone was laid by the Reverend Septimus Llyod Chase of St Paul's Melbournon 4 April 1861.

The church was erected in 1861 and officially opened on 12 December of the same year. It is the oldest intact church building in Eltham. The first vicar was the Reverend Robert Mackie, from 1864 to 1866. St Margaret's builder was a local, George Stebbing, and the architect was Nathaniel Billing.

Constructed in the Gothic Revival tradition, this early polychrome brick structure has a central turret with bell housing, the patterned brickwork has been achieved using lines of manganese brick headers arranged in geometric patterns. It is an early and restrained example of patterned brick work. It was the first polychromatic church in Australia, using softly contrasting colonial brickwork.

St Margaret's was originally called 'Christ Church' until its consecration in 1871, when it was completely free of debt £1700 for the church and parsonage despite the poverty of the district. This was largely due to the free labour and materials; including local bricks, donated by local artisans and others. About half the windows -those in clear glass with gold borders - are original. The stained glass windows were made much later, but the one behind the altar is the oldest in Diamond Valley according to the National Trust. It was to be temporary until the congregation could afford to extend the church.