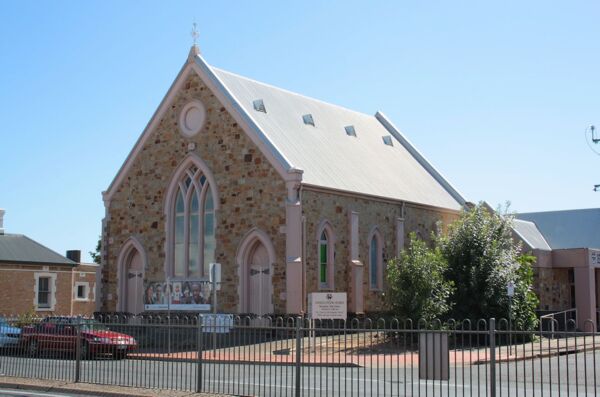 The first church was built on the southern corner of Park Street and North Road, Enfield Park. The foundation stone of this Wesleyan chapel was laid on Monday, 9th October, 1854 by Mr A. Forster.

The chapel was opened for Divine worship on Sunday, 25th February, 1855 on which occasion sermons were preached to large congregations by the Revs. Thrumm, Dare and S. Williams.

The second church, at Enfield, was erected on the northern corner of Park Street and North Road, Enfield Park. On the 3rd February, 1881. The foundations were put in in December, 1884. Stone from the Stockade was carted by Mr. Donnon while Messrs. William Lox, J. Williams, J. Ragless and B. Capper voluntarily carted gravel from the river.

Services to celebrate the opening of the new Wesleyan Methodist Church at Enfield were conducted on Friday, 10th September, 1886 and on Sunday and Monday, the 12th and 13th.

In 1934, the Prospect Circuit was divided into three circuits. Enfield with Kilburn became a separate Circuit with the Rev. L.M. Humphrey as Minister. In the same year it became necessary for the Trustees to provide a manse for the minister of their new circuit. A house, at the eastern corner of Park and Emilie Streets was purchased and a room added, the whole costing 825. This building became the home of Mr Humphrey and succeeding ministers for 29 years.