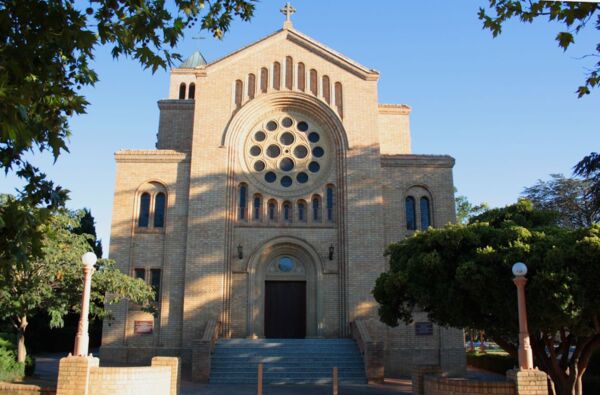 The Cathedral is a Romanesque style building made of brick. The Romanesque wall arches and window jambs are all formed of cream, rounded moulded bricks, as are the door architraves. Its south-east front is symmetrical, dominated by a large rose window above a decorative arched entrance in synthetic stone. Large recessed wall arches in moulded bricks enhance the facade, as do the raking corbel arches under the main gable. About mid-way on the Franklin Street wall of the building is a bell tower, almost double the height of the building. Standing approximately 31 metres high, it is built in the style of an Italian campanile. At the foot of the tower is a side entrance to the nave and a separate entrance to the chapel. The floor of the building is of tallow-wood and the joinery of Pacific maple.

The builder was Mr Warren McDonald of Queanbeyan and the architect Mr C. Clancy of Sydney. The cream bricks were especially moulded by Punchbowl Brick Co. in Sydney.

The square tower has a copper roof and is ornamented with a tall cross . It contains three bells, one that was formerly in the Sacred Heart church in Darlinghurst which was installed in 1973 when the tower was erected, and two bells cast in Holland which were presented to the Cathedral in 1986 by the Morrison family.

The original bell for the church was never satisfactory and in 1986, two large bells made in Holland were installed into the bell tower to join the original bell. These two bells were a gift from Father John Morrison as a memorial to his parents of Tralee Station at Queanbeyan and are inscribed with their names, "John" and "Mary".

The present pipe organ was built by Hill, Norman & Beard and was used by St James' Anglican Church, King Street, Sydney, whilst their organ was being rebuilt. Its size was doubled when installed on the gallery 26 September 1972.