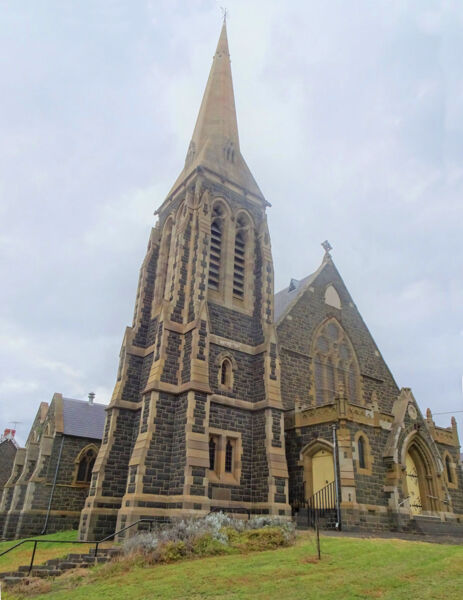 St George's Presbyterian Church was formed in 1861 by a breakaway group from the St Andrew's Presbyterian Church in Yarra Street. The large and finely constructed Church reflects the wealth of many of the Church's foundation patrons, which included Francis Ormond and other western district squatters. The Church is a significant and intact work of noted ecclesiastical architect Nathaniel Billing. Important Presbyterian Church historian, the Reverend A J Campbell, was the first incumbent.

The foundation stone was laid on 12 June 1861. Brown and Gibson, contractors, built this early English Gothic Church from designs by architect Nathaniel Billing. The original large nave with vestry and apse constructed of irregularly coursed basalt with Hawkesbury River freestone dressings was extended by the additions of transepts and vestibule in 1908 and spire and tower in 1936

The tower and spire, the gift of Mr. James Mc Phillimy and his sister Louise, marked the 75th Anniversary of St. George's, of which the Mc Phillimys had been members for fifty years.

The exterior freestone has been restored. The stain glass windows, manufactured by Ballantyne and Company of Edinburgh, are of particular interest as fine examples of this craft. The adjacent manse of 1865 is also by Nathaniel Billing.

The Church was closed around 2010.