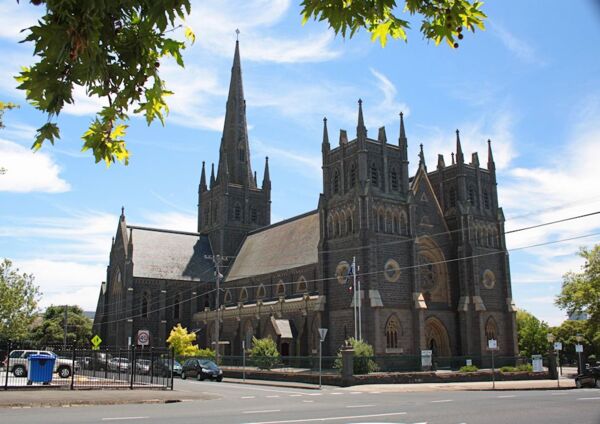 On 27 November 1842, when a small wooden chapel was erected on Geelong's Yarra Street, thanks to donations from the congregation. This modest hut was one of Geelong's first churches.

In 1846 the foundations for a stone church were laid on the present site. The foundation stone was laid by Fr. P.B. Geoghegan and the church was completed the following year. It was designed by Samuel Jackson.

The plans drawn up by Messrs Dowden and Ross called for a magnificent cathedral-like building, 200 feet long, 130 feet wide and costing £40,000. It featured a giant bluestone spire, flying buttresses and an exquisite rose window. The bluestone construction would be complemented with the finest Barrabool sandstone quarried from the local hills.

In 1854 the foundation stone of the new St. Mary of the Angels Church was laid. However in 1856, work on the new church ceased. After seventeen years, the arrival of Archdeacon Slattery to Geelong in 1871 was the catalyst for work to commence on the new church and in 1872 the new St Mary of the Angels was dedicated despite the fact that the spires were not yet installed.

In 1931 work began on the completion of the church as it appeared in the original plans. Six years later, in the midst of the depression, the work was completed.

The completed church was consecrated by Reverend Daniel Mannix D.D. Archbishop of Melbourne 16 June 1937. In 1969 repairs and renovations costing $95,000 commenced and again in 1995 further repairs costing $300,000 were carried out.