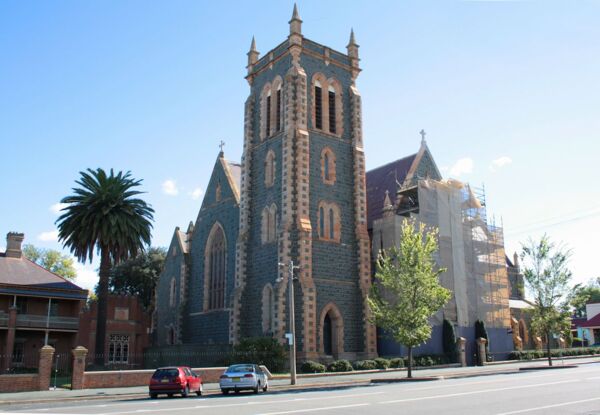 The first Mass in the Goulburn District was celebrated by Father Therry in 1833 at Matt Healey's Inn (now called Riversdale).

Gothic in style and built of local greenstone the completed cathedral was opened and blessed by Cardinal Moran on 29 June 1890. Costing £13,575, Goulburn Cathedral the first stage was designed by Charles Spadacini and the second stage by Andrea Stombuco and was built by C J O'Brien and Wilkie Brothers.

Renovations were made in 1927-1928 under Bishop Barry. The floor was replaced with a swung concrete floor and covered with wooden parquetry. The aisles were covered with bitumen adhesive and rubber tiles in the 1957 renovation. The sanctuary floor was raised, the main altar and reredos were moved back to the eastern wall and the sanctuary was lined with marble.

The organ was originally powered by hand operated bellows and later by water power which operated a large pair of bellows. The large bellows appear to have been operated by a type of hydraulic ram with which its valves alternately opened and shut. Whilst fairly heavy on water consumption it would provide a positive bellows drive. About the only evidence of water power left is the large water meter still outside.