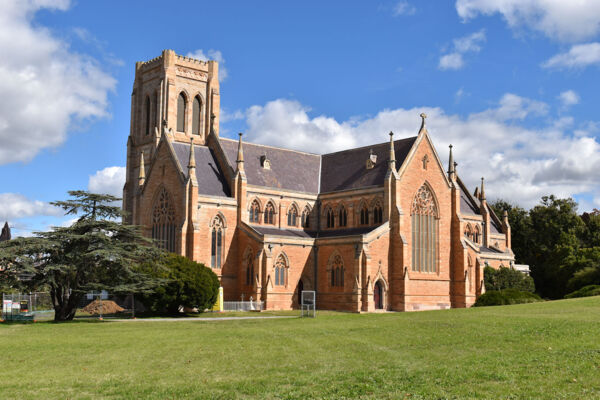 This is the second of two churches built on this site. The first was erected in 1839. The Foundation stone for the current Cathedral was laid in 1874.

The Cathedral was designed by the leading colonial Ecclesiastical Architect, Edmund Blackett. The Church is built of white sandstone and reflects the characteristics of a Victorian Gothic style church.

The Cathedral stands on the site of the first Church of St Saviour which was built in 1839. In1863 the diocese of Goulburn was declared and it was the first Anglican diocese to be separated from the Sydney Diocese. Goulburn's church became the procathedral for the diocese while Bishop Mesac Thomas set about gathering funds to enable a cathedral to be erected. Construction of St Saviour's Cathedral began in 1874.

Built by the local firm of R and J Turner, Duncan, Nelson, and Le Breton and it cost £25,000. Due partly at least to the intricate stone work involved in the project, the building was not sufficiently complete to enable it to be dedicated and licensed until 1884, by which time Blacket had died and the church design had had to be completed by his sons, Cyril and Arthur. The cathedral was consecrated in 1916, although the tower was not built until 1988.

The furnishings, designed by Blacket, are particularly well designed, especially the oak Bishop's throne, one of the most elaborate pieces of Australian Victorian architecture extant. The font and pulpit were carved by John Roddis of Birmingham. Installed in 1884, the organ was manufactured by Forster and Andrews. Among the other features of the interior is the Soldiers' Chapel built in 1922 and the carving of the Last Supper by W P McIntosh which is located above the altar.

The Organ was built in 1884 by Forster & Andrews of Hull and was originally placed in the west gallery.

The original action was mechanical with pneumatic lever to the Great and Swell. In 1902 the organ was moved from the gallery to its present position in the chancel end of the south aisle, where it was reconfigured and provided with tubular-pneumatic action by Frederick Taylor of Melbourne.

1. An Ornament to the City A history of the Cathedral Church of St Saviour Goulburn 1874 - 1988
2. Cable Clerical Index.