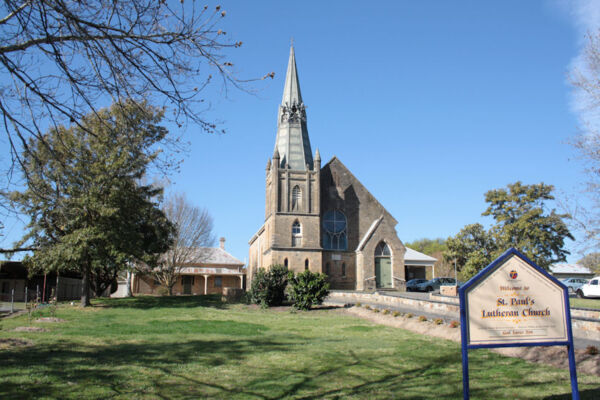 In 1838 a ship called the "Prince George" sailing from Tschichnrzig, not far from Zueaichau, between Brandenburg and Siiesia (Schleswig) in Germany, and berthed at Plymouth Sound, England, on its way to Australia. Here a pastor August Kavel joined the ship. It was this Pastor who was the founder of the congregation of St. Paul's, Hahndorf.*

With money donated by a Mr Dutton a small loam church was built, and dedicated in 1840 and located where the where the current St. Michael's Church stands.

At one of the first Synods held at Hahndorf, probably between March 26-30 1840, an invitation was sent to various men, including P2_stor Gotthard Daniel Fritsche and their congregations, to migrate out to Australia and here to Hahndorf also. So there came a second wave of Lutherans who felt oppressed in Prussia to this south land. So it was that Pastor Fritsche, with 274 souls came to Australia and landed here on October 28 1841. The mention of Pastor Fritsche is historically necessary, because at the beginning until 1846, both Pastor Kavel and Fritsche were able to work together very well in the founding of the Lutheran Church of this land; but unfortunately it was just these two personalities who brought about the separation of the Lutheran Church in this country.*

The first English services commenced in 1920.

Pastor Kavel was excluded from the Church, and after having services in the Manse, the Supreme Court ruled against him keeping possession of the Manse so. he had to quit. And so it came that the 30 families that had remained faithful to Pastor Kavel dwindled, by some going north to found the congregations of Nain and Gruenberg. and some remaining to build St. Paul's congregation and Church.*