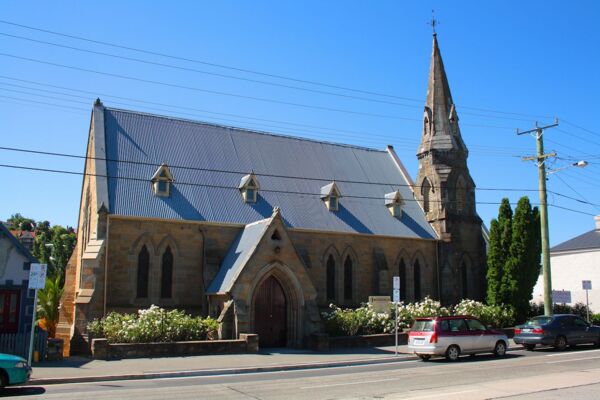 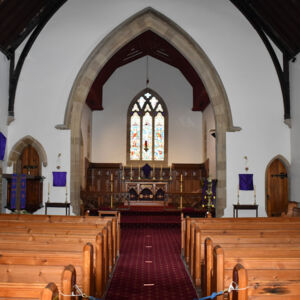 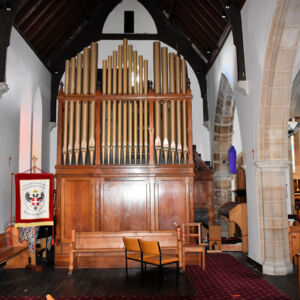 The foundation stone was laid on 2 December 1858, and the building was opened for worship on 18 August in the year following. It was a condition of the contract that the Rector lead the workmen in prayers before the start of each day's work. The side-aisle and chapel were added in 1863 and the vestries in 1895. The Architect was Henry Hunter (1832-1892).

The architectural style of All Saints is 13th century gothic in the period of transition from Early English to Decorated, a period marked by its simplicity of line. Notice the lofty pointed chancel arch and the east window of matching proportions. (From about the turn of the century until 1978 these proportions were obscured by a screen at the chancel step, and by a canopy over the high altar covering the lower panels of the east window.)

The handsome stone font was also designed by Hunter and donated by the first Rector, the Revd J T Gellibrand. On four of its eight faces are the symbols of the Evangelists: an angel (S Matthew), a lion (S Mark), an ox (S Luke), and an eagle (S John).

The sanctuary and its altar are the focal point of the church. The altar is in memory of Tarleton, who died on his way home from service here on 7 July 1895. The altar rails., the screen across the opening in the north wall of the chancel (until 1978 part of the chancel screen), and the panelling  at the sides of the sanctuary are in memory of a much-loved Rector, Samuel Bucknell, who died in 1904.

Originally built by the London firm of Bishop and Starr, the pipe'organ was installed in 1862. The following year it was enlarged and had the first of many moves to what is now the Lady Chapel. It was rebuilt and enlarged further, with the action changed from tracker to tubular pneumatic, by George Fincham & Son of Melbourne in 1920. Davis & Laurie of Launceston rebuilt it again in 1963, adding new work and changing the action to electro-pneumatic. It was moved to its present position, with new casing and a detached console, by the Hobart firm of Long, Langlois & Johnstone in 1979.

1. A brief guide to the Anglican Church of All Saints South Hobart.