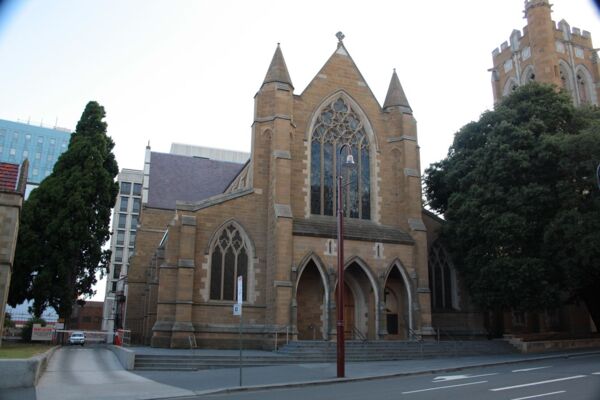 On 17 January 1862 St David's Cathedral and land on the corner of Murray and Macquarie Streets, Hobart was granted by the Crown to the Trustees of the Diocese of Tasmania.

The original church on this site is dated from 1817. The Church was named in memory of Governor David Collins who established Hobart in 1804. It was completed in 1823 and the steeple replaced in 1835. With the appointment of Bishop Nixon in 1842, St David's church became a cathedral. In 1865 Bishop Bromby advocated building a new cathedral and in 1868 Prince Alfred, Duke of Edinburgh laid the foundation stone. Henry Hunter was appointed supervising architect and the building contractor was James Gregory. The nave was consecrated in 1874 and the bishop led a procession from the old St David's church next door into the new cathedral, after which the old church was demolished. The chancel, completed in 1893, was rebuilt in 1909 due to structural problems.

Plans prepared by Bodley and sent from England in 1866. Plans were modified in 1867 and this is the second church on this site.