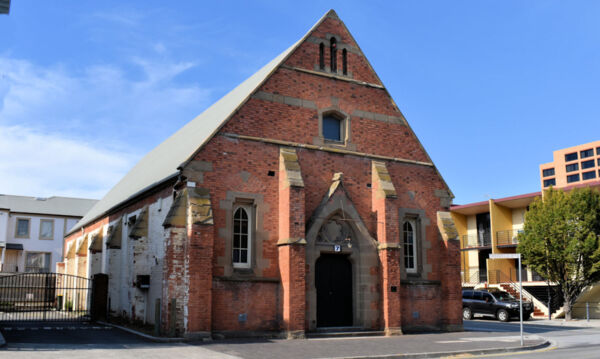 The foundation stone of St. David’s Mission chapel was laid on the 24th of November 1884 by the Bishop of Tasmania, Rev. Dr. Daniel Fox Sandford. The design of the church was entrusted to Mr H Hunter, architect of Macquarie Street who prepared plans for a building to cost £1,500. In basic Gothic style and built of brick with stone dressings. The interior  consisted entirely of one long naive 81ft by 32ft from which a chancel of about 19ft in depth will be screened off.

Its object was to reach the "poorer classes" of the city. It was situated in a low-income precinct known as Wapping that had a bad reputation, due to having 13 pubs in four blocks. The chapel was not formally consecrated when it opened in 1885 as there was still a considerable debt to be repaid for the cost of construction. It was expected that the "poorer classes), of Wapping would pay off the debt. The chapel closed in 1914, once the debt was cleared. In 1915 the Anglican Church gave the building to the Mission to Seamen to save visiting sailors from "the loneliness and temptations which attend their shore life".