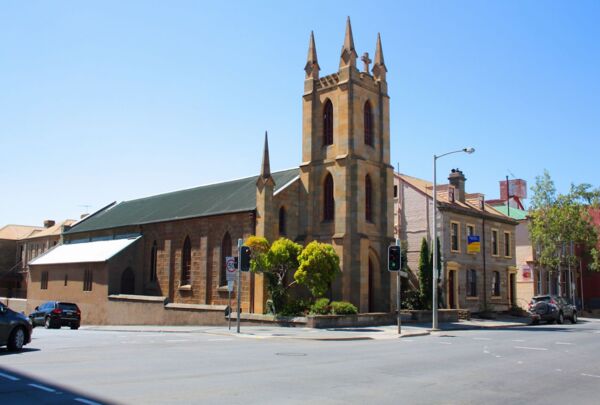 A sandstone church built in Gothic style. Has a Nave with featured stonework to arched openings and pilasters to side walls.

The church was built in 1841 and opened by Father Therry on Christmas morning 1841. It was designed by James Thomson, a former convict with convict labour employed to carry out the work. The tower is 60 feet high, and was completed in 1843, and the side chapel in 1877 as a choir for the Sisters of Charity. In the 1930s the sandstone side chapel was replaced with one of red brick. St Joseph's served as a cathedral when the first Catholic Bishop of Hobart, Robert Willson, was installed in 1844.

The stained glass windows were added between 1856 and 1893 and with the exception of one, were made by Hardman and Scott of Birmingham, UK and were constructed in memory of renowned English Gothic Revival architect Augustus Pugin. The cedar pulpit was made in 1856 by Henry Hunter, architect in charge of the alterations. It was originally mounted on the wall above the sacristy door. It was later moved to a lower base and eventually placed on the far side in the sanctuary during the more recent renovations.

This is the oldest surviving Catholic church in Hobart and served as a cathedral while St Mary’s was being built.

For a complete history go to the Church website here.