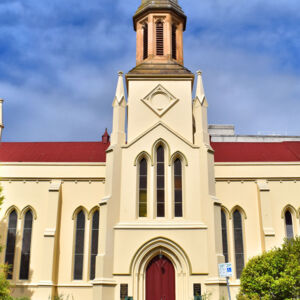 It was the second Presbyterian church to be built in the city of Launceston following the Scotch National Church on Charles Street (built 1831).

The land was secured with a petition to Lieutenant-Governor, Sir William Thomas Denison for a lot of land occupied by one of the colony's original watch houses. The Building Committee advertised for plans of a church capable of seating 700 people.

A total of 14 designs were submitted by eight competitors with the winning design, though significantly smaller than advertised with a capacity of only 320, was won by William Henry Clayton of Norfolk Plains who later went on to become the Colonial Architect for the New Zealand Government. Clayton's plans called for a simple Gothic-inspired church built from local bricks rendered over in stucco with sandstone decorations and spire with entrances off both Patterson and St John Streets.

On 16 October 1849, the foundation stone for the new church was laid by Lieutenant-Governor Denison. The Architect was E.S. Wright and the Builder was Paul Bath.

Between 1883 and 1885, a series of earth tremors were felt across Tasmania and Victoria which were attributed to the eruption of Krakatoa. One such tremor recorded on 14 July 1884 caused extensive damage in Launceston affecting mostly chimneys and plasterwork of various buildings around the city. This tremor skewed and shifted a number of the masonry pinnacles surrounding the roof of the church.

In 1933, the original organ was replaced with the present-day organ, originally built in 1860 for Dr. Valentine of Campbell Town. Before being installed in St Andrew's Kirk, the organ was used in the Seaman's Mission in Hobart and St Luke's Church of England in Latrobe. In 1961, the organ was rebuilt and enlarged to its current size by Davis and Laurie followed by a 2005 rebuild of its electro-pneumatic action which was installed in the earlier 1961 rebuild.