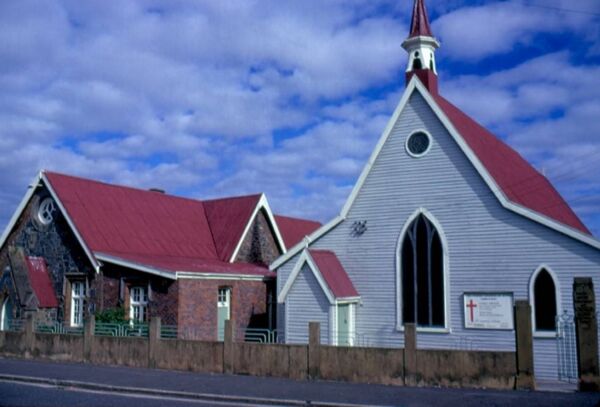 The first recorded meeting of parishioners was held November, 1854, those present being the Chairman Rev G.B. Smith, Austin, Barnes, Cleveland, Henty, Palmer and Turnbull. Cleveland and Turnbull were appointed Churchwardens. At a meeting on 9th February, 1855, it was proposed that school be opened in the temporary Church in Frankland  Street.

There had been suggestions of purchasing land in Wellington Road for the erection of St Paul's, however the cost of the land was considered too expensive. In June 1860, a site known as Beveridge's Paddock was decided upon. On 1 November 1860, the foundation stone of thenew St Paul's Church was laid ,by Archdeacon Reibey, and on 27 November, just over three weeks later, the foundation stone of the new hospital was laid.

The Parish of St Paul’s Church of England, established in October 1854, first worshipped in a Frankland Street schoolroom between Charles and Wellington streets, Launceston.

The builders, Messrs. Fowler and Davies, completed the work in time for the opening by Bishop Nixon on May 12, 1861.

The final service was held on October 10, 1975 by the Bishop of Tasmania, the Right Rev. RE Davies. He performed the last rites, stripped the altar and carried out books from the lectern in a solemn procession, symbolising the end of life for St Paul’s.

The Church eventually made way for the Launceston General Hospital.