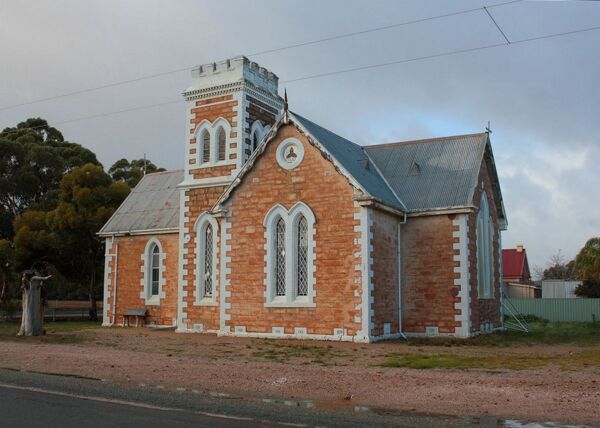 The town of Laura was surveyed in 1871 and in August 1873, the church acquired Blocks 1 and 3 at £17 Ten Shillings each; portion of Block I is still retained, thereon being erected the Church of St. John and the Parish Hall. The first known church of England service in Laura was conducted by the Rev. Hartley Williams, a missionary from Melrose, in a room at the Laura Hotel in August, 1873. Subsequently Mr Alfred Smith, a carpenter, set aside a room in his home for the use of visiting clergy and the holding of services.*

The foundation stone of the Church of St. John was laid on the 16th August, 1875 by Mrs. Sabine, wife of Thomas Frederick Sabine, a lay-reader and prominent businessman in the district.*

Specifications of the building were apparently drawn up by the contractors Messrs Hew and Shephard, contract price was £375 but possibly reached £500.*

Mr Melville Burgess of Laura, records that the stone for the church was quarried, carted and given by his grandfather, Levi Burgess, and his 6 sons. The pews were the gift of Mrs. Levi Burgess.*

The actual date the church was formally opened is not known but a letter from the Rev. Hartley Williams dated 2nd February, 1876 states - "The Bishop does not propose to visit the areas until March when he hopes to formally open the churches at Jamestown and Laura.*

The first marriage in St. John's was that of William Dack and Miss Bishop. On 9th January 1876, Mary Alice Ives, infant daughter of Henry and Harriet Ives Iron fitter of Pine Creek, was baptised.*