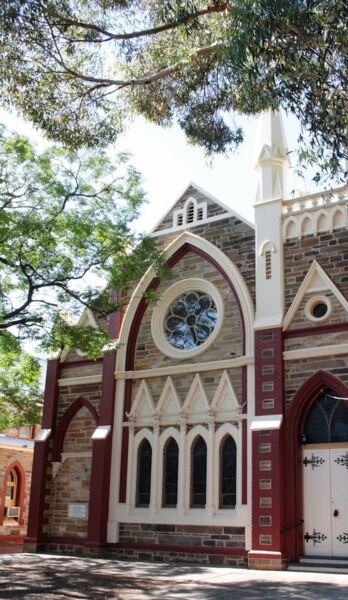 The Wesleyan Methodist's of South Australia built a church in King William Road Unley in 1881.

At the beginning of 1891, Malvern Church had been little more than a vision in the minds of a group of church leaders from Pine Street and Unley. The plans of F. W. Dancker gave some type of substance to their hopes, and the support they received through philanthropic gestures from John Colton, the Matters brothers, William Shierlaw and a number of others was an encouraging sign. The laying of the building's foundation stone by the Rev. Mark Guy Pearse was another step along the way. Then, in August 1891, came the climax to the flurry of activity during the previous year the church building was ready for opening and dedication.*

By early November 1890, 446 in contributions had been raised, including a gift from Colton and Matters families. Within another fortnight, two architectural firms had been approached to provide sketch plans and estimates, preferably 'free of cost', for a church costing 1000 in the first instance, with room for additions of another 1 000 as funds became available. The architects acquiesced and, with great alacrity, submitted plans by 2 December. The idea was, as the church's first minister, the Rev. J. R. Bradbury, recalled, to build a good solid church suitable for such a place. Bradbury stressed that the solidity of the structure was apparent from the very start. Work was begun, and in order to make the foundations secure in such ground, red-gum or jarrah piles set in concrete and bolted at each corner with steel bolts were used.*

F. W. Dancker's design for the building was accepted on 30 December, subject to some alterations. Dancker proceeded with the changes, tenders were called and eight received - all higher than anticipated, ranging from 1 293 to 1 700. The lowest amount, from G. H. Hudd, was accepted.

The Foundation stone was laid 17 March 1891 by Rev Mark Guy Pearce of London. The Church was formerly a Wesleyan Methodist later to become a Uniting Church.

Church music became a feature from 1920 onwards and by 1927 ABC radio 5CL broadcast Steiner's Daughters of Jairus. By 1937 a men's fellowship had been formed.