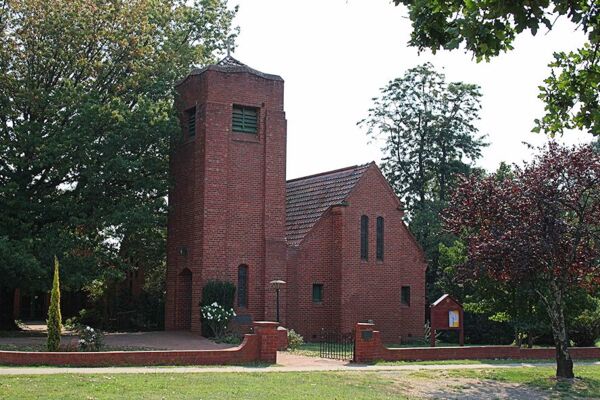 The Foundation stone for the original Church was laid on 5 September 1865 by Mr Alfred Chenery J.P. The first service was held in May of 1866.

Consecration of the Church took place on 9 November 1887 and was performed by the Right Rev Bishop Filed Flowers Geo.

The Parish Hall was approved for construction in 1906 and was to be of brick measuring 45ft x 24ft and the contract was let to Mr J Thomson. Renovations were made in 1921 and in 1931 the floor had to be replaced due to white ant infestation.

In 1938 it was decided by the vestry, again faced with having to renovate the old church, that a new church should be built and that no more than 92,800 be spent on such a project.
Mr. Louis Williams, the architect, was approached to draw up plans for a brick building, with provision to be made for a bell tower. Fortunately progress was rapid.

The tender of Mr. Dunwell, of Melbourne, was accepted and building and operations commenced. One of the most notable features of the new church, namely the beams supporting the roof and ceiling, were incorporated from the old church. The pews in Manchurian Oak, were donated anonymously, two stained glass windows and a rose window above the altar were given in memory of parishioners. The Foundation stone was laid on 13 February 1939 and by 1941 the building was complete.

In August 1961 tenders were called for the erection of the entrance hail and toilet block of the new hall, and for the laying of the concrete foundations.

Imported to Australia by the German firm of E. F. Walcker & Co and was installed in St James' Uniting Presbyterian Church, New Lambton, Newcastle in 1965. It was moved to Mansfield in 1990 where it was installed by Knud Smenge. The organ is located in the north transept.