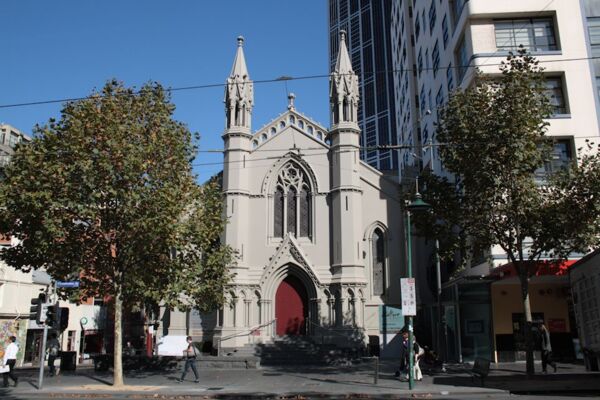 A Church has occupied this site since 1847. The present building has associations with the early history of the Free Presbyterian Church in Victoria(1863), particularly with the Reverend James Forbes. Its architect, Charles Webb, was very important in nineteenth century Melbourne. His works include several Churches, of which this is notable example. Form and composition are typical of the Gothic Revival in Victoria. Arcading and mouldings around the front door and the tracery to the west window are interesting features.

The building of John Knox Free Presbyterian Church, Swanston Street was opened 8 May 1848 on the corner with Little Lonsdale Street and with frontage to that street. The John Knox School began in the building on 3 July 1848 with T.J. Everist as teacher. Within a year there were 120 students and an adjoining brick building came into use in August 1850. The congregation erected a two-storey manse next door to the church in Swanston Street late in 1850. The church was reconstructed in 1863 and re-opened by Rev William McIntyre 26 July of that year.

The form of Charles Webb's rendered brick church, with slate roof, is typical of the Gothic Revival in Victoria. Early English in style, buttresses divide the nave of the church into six bays, each containing a simple lancet window. Most of the decoration of the elaborate front facade is concentrated on the central section, which incorporates a traceried window above an entrance of receding orders, flanking octagonal turrets and a pierced parapet.-

October 22 1865 is the starting date of this Church. The congregation first met in Manchester Unity Hall now occupied by UniLodge. In 1883 the Church leased the John Knox Church (the current Chapel). From this they raised up 4500 to purchase the building. This was the humble beginnings of what was then known as Swanston Street Church of Christ.

The church also had contacts with overseas Asian Students as early as 1961. From 1964 onwards, there were an increasing number of overseas students attending Swanston Street Church of Christ.

Now called CrossCulture Church of Christ (formerly Swanston Street Church of Christ) it is not just a church in the heart of Melbourne. It is a church that has the city and the world on her heart. The church's ministry is making an impact on Asia and other parts of the world. Hundreds of overseas students who have received their Christian training whilst in Australia are making vital contributions to their home churches.

The first organ was built by B. W.G.Vowles, of Bristol in the UK.