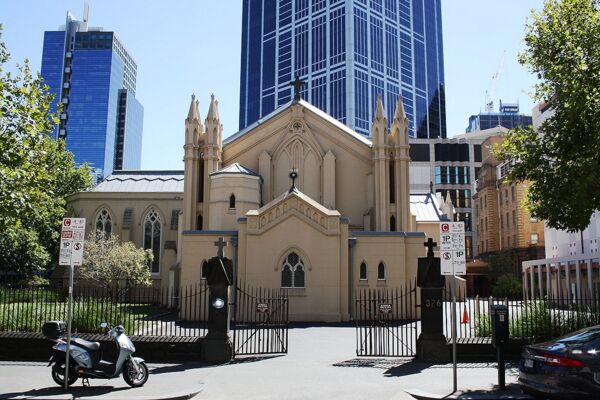 Melbourne. Victoria's oldest church it was designed by Samuel Jackson. The Foundation stone was laid on the feast of St Francis of Assisi on 4 October 1841.

The first mass was celebrated in the completed nave of the church on 22 May 1842. And the church was blessed and opened on 23 October 1845. Blessed Mary MacKillop (18421909) made her first communion at St Francis' in 1850, the same year that bushranger Ned Kelly's parents were married in the church. The beautiful Ladye Chapel' on the western side of St Francis' Church was constructed in the mid 1850s and blessed on 31 May 1858.

A Renaissance style sanctuary, which extended the church, was built in the late 1870s. From 1848 until the transfer to St Patrick's in 1868 St Francis was the Episcopal seat of Bishop James Alipius Goold. In 195556, a new front porch was added to the building and ten new confessionals were built as buttresses along the outer wall of the nave.