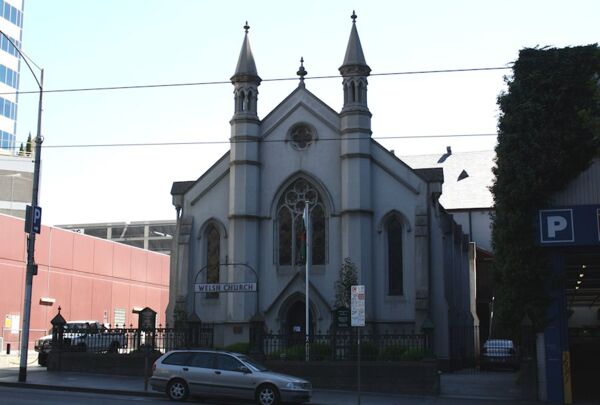 Built in the Gothic Revival style the church was designed in 1871 by Charles Webb. The contractor was Mr Ireland.

The first Welsh Service in Melbourne was held at the Baptist Chapel Collins Street East in December of 1852. The Preacher was Mr Zorenbabel of Carmarthen Wales. From then on Welsh miners regularly gathered for worship here until 1853 when they moved to the Common School in Collins Street.

But in 1854 a site in La Trobe Street was granted by the government for the designated purpose of a Welsh Calvinist Methodist Church. A small chapel was built on this site in 1856, with the words 'Welsh Chapel' written in gilt letters above the door. The Welsh language was an important element of church services, as was music and singing. Services were delivered in both Welsh and English.

By 1870 there were concrete plans to build the current Church however due to rumblings within the members the Gymanfa (Association) took control of the Church. By October 1871 the old chapel had been demolished and a new church was in the process of being built. The cost was 1,370.00.

The church was constructed of rendered brick on an axed bluestone base, with shallow relief towers two octagonal relief buttresses with pointed openings below the spire. The pointed, stained-glass windows were designed by the Melbourne manufacturers Ferguson, Urie and Lyon.

Interior elements include the arrangement of pews from a circular to a straight pattern, and a raked floor, which is characteristic of Nonconformist churches.

St David's Hall, which comprises a hall and classrooms, occupies a site behind the church. Built partly using unemployed labourers, this opened in 1893 for use as a meeting room and for children's Sunday School lessons. It was designed by architect S.W.L. Powell and the building contractor was John Jones. St David's Hall was also connected with the development of a teaching hospital run by women for women and children. Pioneering woman doctor Dr Constance Stone, whose husband was a minister at the Welsh Church, commenced the campaign for the hospital in this hall in 1896.

The timber for the present organ was donated by Rev D. Egrys Jones from his property in Tasmania. Mrs Stuart Cowen was the Organist for 50 years form 1921.