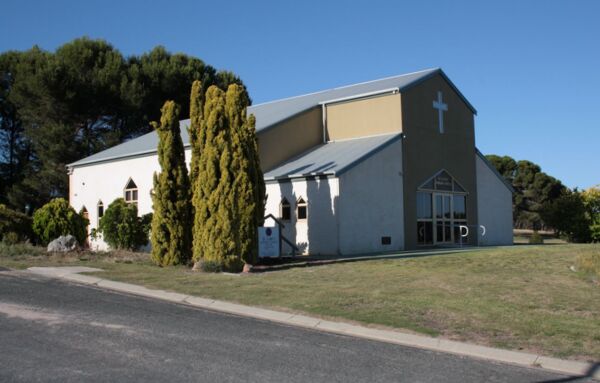 Lutheran services in the area go back to 1931 when Pastor T.G. Obst held services in a private home in Narrung. Services were also held in Wood Well. By the 1950's services were held in the Anglican church by Pastor Leo Doecke. On 5 May 1957 it was decided at a meeting to form a separate ELCA congregation from that of the Tailem Bend congregation.

In 1958 it was decided to tender for the former Methodist church on the Princes Highway. The tender of 650.00 was accepted. On 22 February 1959 the church was dedicated.

The Foundation stone was laid on 26 February 1984 by Pastor C.I. Koch. By 1987 the wooden floor needed to be replaced due to wood rot. A cement floor was laid in the following year.

In 1974 refurbishments were needed and by the following year an organ had been installed however by 1978 a new home was needed. The Welk building at the end of West Terrace was purchased. Originally a fish factory a local Architect student, James Riddell accepted the challenge to design a new church within the confines of the present building. By 1983 his plans were accepted and local contractors Wyatt Constructions were the builders. With an Organ loft fitted and four separate internal rooms the church could see 200.