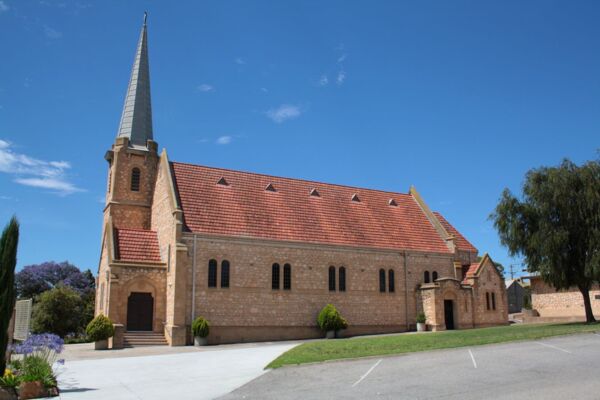 The first Lutheran services were held in 1882 in a shed used by railway construction employees. This continued until 1884 when Mr F.W. Jaench offered a room in his home. He later sold a piece of his land for a church and an even further offer was made by Johann Gottlob Jaensch who subsidsed 10 shillings for every 1.00 raised.

The original church was built in 1896. The new church was designed by the architect Dean Berry. Its cost (£4,700) was paid for by the efforts of the con-gregation, including a large gift from Mrs. ·Bertha Gehrike, following in the steps of her father, Gottlob Jaensch, "who did for the first church what she did for the second one." The contractors were Wilckens and Burnside of Norwood, who constructed the limestone and brick church during 1938. The official opening was held on 27th November, 1938.

By 1937 it was decided a new church building was needed. Architect Mr Dean Berry was engaged. A local, Mrs Gehrike offered 800.00 towards its construction. The contractor was Wilckens and Burnside of Norwood and the total cost was 3,885.00. The foundation stone was laid on 29 May 1938 and was opened on 27 November 1938.