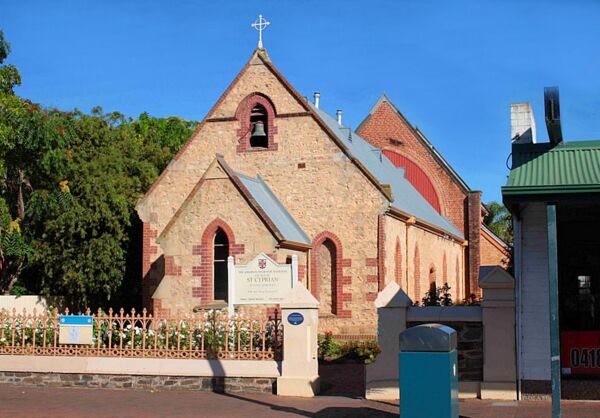 The land was purchased in 1872 and the construction took place between 1882 and 1883. The financing was orchestrated by the Christ Church North Adelaide. The Architect was Daniel Garlick a prominent South Australian architect. Most of the students and congregation were working class people who lived nearby, some of whom worked for the wealthy residents of upper North Adelaide. Of Gothic Revival design the walls are of limestone rubble over brick dressings to shouldered arches above doors and lancet windows.

Until 1890, the church was served by the clergy and lay readers from the nearby Christ Church. However, in that year, decreasing pew rents caused by economic depression, and the loss of worshippers from Christ Church to the newly completed St Peter's Cathedral, caused the church to be handed over to the Anglican Church's mission society. In 1898, it was rededicated as St Cyprian's, as part of a campaign of naming mission churches after early Anglo Saxon or Celtic saints to illustrate the early English origins of the Church.

Installed by W.L. Roberts, it was built by Walter George Rendall though the exact date of its construction is still uncertain. By implication from press reports of Rendall's work at the time, it had been determined that the organ must have been built in 1881-82. However, renovations in 2000 revealed a builder's plate beneath the memorial plate of 1927 bearing the date 1880.

George Stephens renovated the organ in 1985. In the year 2,000, the organ case and organ seat were stripped, repaired, and revarnished.