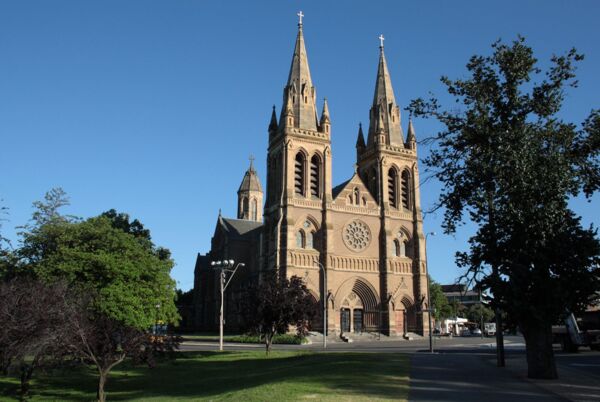 The first bishop of Adelaide, Augustus Short, brought with him in 1848, plans for a Cathedral. The plans had been drawn up by English architect William Butterfield and is in the Gothic Revival style.

The Foundation stone was laid on 13 July 1869 by Bishop Short, the first Bishop of Adelaide. Designed by Butterfield but plans modified by Woods of Wright, Woods and Hamilton. The builders were Woods and McMinn, and listed as Brown and Thompson. The remainder of nave was consecrated 1901. Towers and spires 1902, Lady Chapel 1904. E J Woods architect. Finally completed 1930. The structure is mainly decorative Gothic consisting of a sanctuary, choir, dwarf transepts and nave, with a lantern tower springing from the junction of sanctuary and transepts to a height of 110ft and two western towers with buttresses and minaret spires rising to 140ft. The total internal length of the Cathedral is 173ft and the width between the aisle walls 59ft.

The first organ was built in 1876 by Bishop & Son at a cost of £1,200. It was installed in what later became the Sacristy. With the addition of the present Nave and Lady Chapel, despite its substantial size it was considered inadequate for the enlarged building. The organ was removed to St Augustine's Anglican Church in suburban Unley where it survives to this day.

The organ is significant in the history of Australian organ-building, since its commission coincided with several other major contracts won by HN & B (notably the replacement of the organ - destroyed by fire on February 1st, 1925 - in the Melbourne Town Hall, followed between 1925 and 1930 by contracts for new organs in Christchurch Cathedral, Christchurch City Hall, Dunedin Town Hall and the Presbyterian Assembly Hall in Sydney - now in Scotch College, Melbourne), and which justified the British parent company's establishment - in August 1926 - of an outpost factory in Clifton Hill (Melbourne) which survived until 1974.