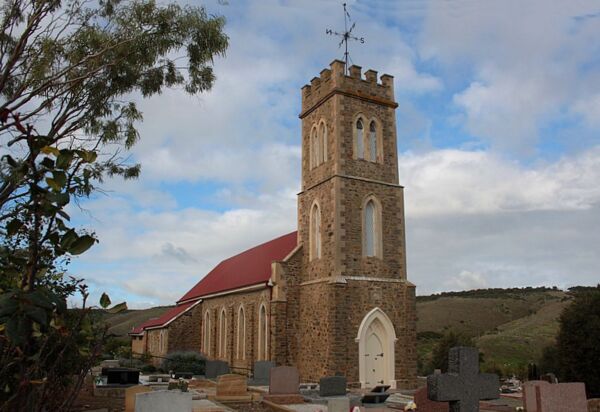 Built in 1850 of local stone quarried from the cliffs on the Onkaparinga River in Old Noarlunga , hauled across the river and up the hill by bullock teams and hard sweat.

Walls are of ironstone quarried from the cliffs of the Onkaparinga River and hauled to the site by a winch powered by bullocks. Simple buttresses divide the walls into bays. Lancets are surmounted by hood moulds and have surrounds of painted stucco. Quoins and strings are also of stucco. The nave has a symmetrically placed crenellated tower above the entrance. Simplicity is also the hallmark of the Church's interior, which is dominated by arched timber roof trusses springing from well carved timber brackets.

When the Church was first built, windows were of calico. These were replaced over time with glass and between the 1890s and the 1930s five leadlight windows were mounted. The Church was built in two stages, with the chancel and vestry being added later (they were dedicated in 1903). The original slate roof was re-clad in corrugated iron in the 1890s. Choosing of the specific Saints' names for the Church was based on the Christian names of two local men who played an active part in the Church's erection.