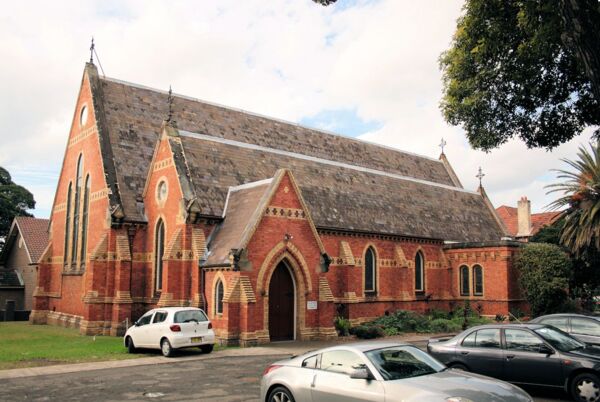 The first Anglican Church service in Petersham was held on 15 April 1860 in a tiny schoolroom. The original building was erected between 1870 and 1875 of red brick.

The western end of the building was commenced in 1879 and completed in 1880. The re-opening service was held on 11 September 1880.

The church Vestry was built in 1886 in memory of the infant son of Mr. A. E. Jaques.

The organ was built in 1886 by Alfred Hunter of London, at a cost of 750, and was the first organ Hunter sent to Australia using a new patented coupling action for the Swell to Great coupler. It was erected by the Sydney organ builder William Davidson. In November 1893 a hydraulic motor was supplied from Finchams in Melbourne which gave many difficulties, resulting in an electric blower being installed in September 1911.
After several organ builders maintaining the instrument, S T Noad & Son restored the organ for 1,000 in 1964. Griffin & Leggo had added two string stops to the Swell in 1913 (Viol d'Orchestre and a Vox Celeste) but these were removed and sold in 1973 to pay for the restoration of the reeds. Four years later the Pedal was electrified by Anthony Welby who also replaced the pedal board. This organ is one of three Hunter organs left remaining in Sydney.